June 20th is an important day for people from the African nation of Eritrea. It’s Eritrean Martyr’s Day – a day set aside to honor those who died in the country’s war for independence. 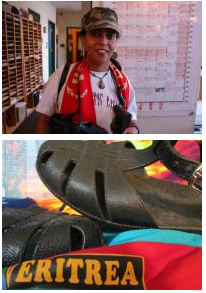 Eritreans all over the world observe it, including here in the Twin Cities where an event is held at the Eritrean Community Center at 1935 University Avenue in St. Paul.

Getting to this community meeting is a ritual in itself for Eden Teklegiorgis. She’s an American citizen from Eritrea who combines recognition of her two countries in a walk that she takes along the busiest streets she can find in St. Paul to get to the event.

She talked with KFAI’s Paul Brohaugh on the Morning Blend. [Audio below]