I once asked prominent Saint Paulite, Lucy Berkowitz, what makes Nina’s in Cathedral Hill so popular and why don’t we have places like it in the suburbs. I expected her to say, “great cappuccinos and food provided by awesome employees.” (…and where the largest sign in a place named after St Paul’s most famous madam is a cheeky.., well, never mind). Instead, without even thinking about it, she said “the building, the walls,” and went on to say how they provide a sense of permanence and a link to our history.

Saint Paul has what few other cities in the U.S. still have: real rock solid history. As Bill noted in his most recent streetcar post, Saint Paul hasn’t torn down the best parts of its historic core. Saint Paul still has many of its appealing historic buildings, and its streets have real names of real people who had a real impact on where we all live and work today.

Like Nina’s walls, these all provide a sense of permanence and continuity and stability—things people are longing for, as most of our cities have destroyed them, and we’ve built suburbs that never had them.

Recently, Saint Paul has become appealing for something else: lack of traffic. There’s still a bit, but not as much as a few years ago, not as much as Minneapolis, and not nearly as much as there will likely be a few years from now. Thanks to this, more people walk around downtown and sidewalk cafes have been sprouting up and thriving.

In the coming years, new buildings will be built and others remodeled. The number of people working in downtown Saint Paul will grow dramatically and the number living here will triple. Union Depot will become a transportation hub bringing people every day to catch a train or bus. All very good things.

What will this change and growth bring with it? More traffic and congestion and noise and pollution and parking problems and fear of riding bikes or crossing streets?

Saint Paul today is warm and comfortable. (Yes, I’ve been outside). It fits. It’s welcoming. And it’s ripe for ruin.

Saint Paul could easily become a just-another-city or a mini-Minneapolis,[1] with all of the traffic and congestion and noise and pollution and parking problems and no unique identity or history. Just another clogged urban downtown like all of the others across the U.S.

Saint Paul, though, has a once in a city lifetime opportunity. A second chance. An opportunity that few, if any, major cities will ever have. An opportunity to avoid becoming another Stockton or LA or Minneapolis—something we already have just a 30 minute bike or LRT ride west of us.

Saint Paul has an opportunity to become something sadly unique in the U.S.—a vibrant, historic, inviting, comfortable, human-friendly city. A city that people want to go to because it’s pleasant; to sit outside and walk around and shop and work and live.

Downtown Saint Paul doesn’t yet have high numbers of residents, and office and retail occupancies are quite low. Now, while traffic is low and development yet to explode, is the time to grab a different future for Saint Paul. 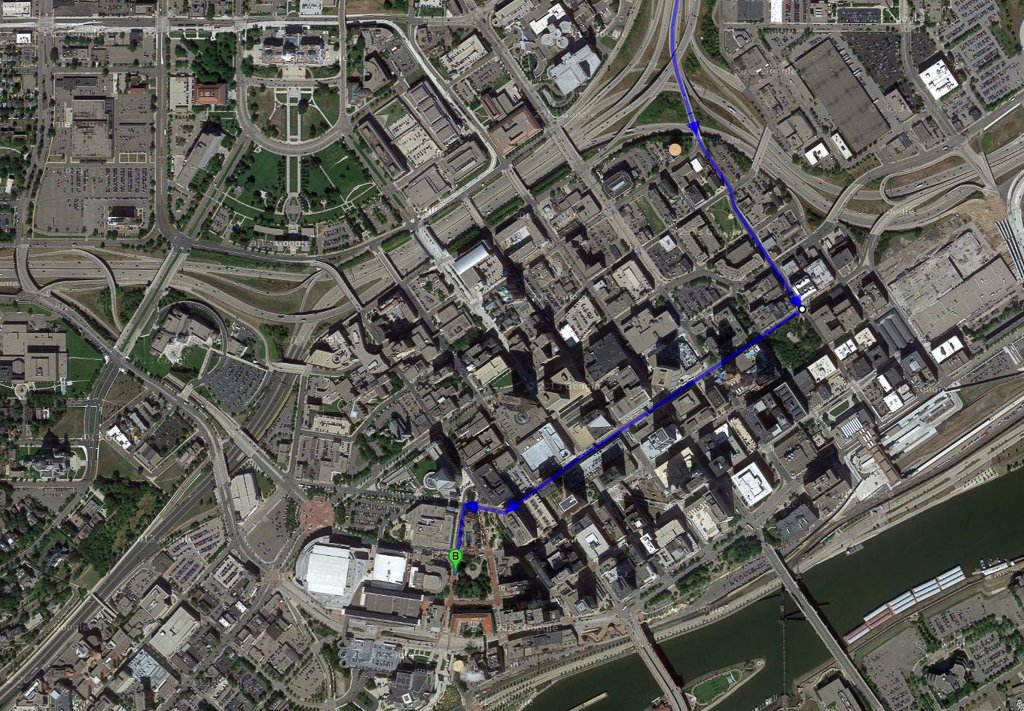 Going to the Ordway via 11 blocks of downtown streets.

Today, someone coming from a northern suburb for work or dinner near Rice Park likely drives their car down 35E, takes Wacouta south and heads west on 6th through the heart of downtown. They’re not patronizing any businesses along this route, but are making it less pleasant for others; to walk, eat, cross streets, or ride bicycles.

We could, instead of clogging through town, drive around it. Take 94 to Kellogg. This is minimal inconvenience and yet provides significant benefit to people in downtown[3]. How do we get people to do it though?

What if we couldn’t drive our cars all the way through downtown? If, wherever we are going, we must always take the route that uses main roads as much as possible and the fewest local streets?

Let’s try this. Imagine downtown Saint Paul divided in to four districts; by Robert Street and 7th Street[4]. Cars can’t cross these streets between districts but people walking, riding bicycles, driving a fire truck, or riding a streetcar can. 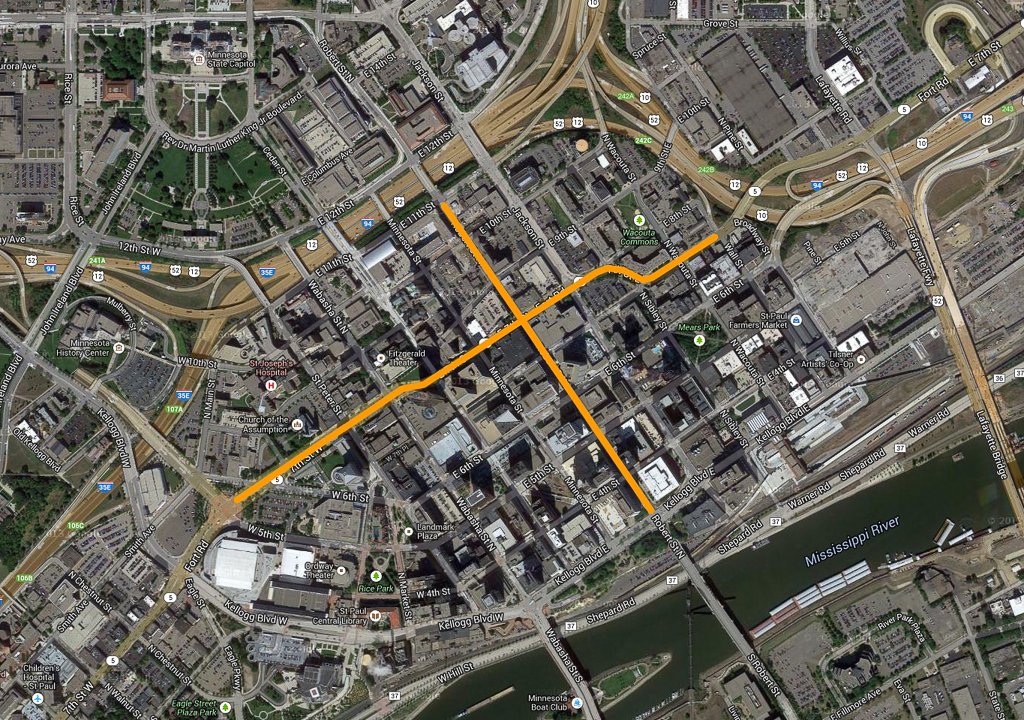 Now, if we’re driving down 35E to the Ordway, in the Southern, or Rice Park, district, we can no longer drive all the way through the North district and most of the way through the Lowertown district and then nearly all of the way across the Rice Park district. We have to take main roads around the city and enter nearest our destination. Instead of adding to congestion on 11 blocks through town, we’ve only done so on 2 or 3. Our negative impact on people downtown is a quarter of what it was before. This will have an immediate and huge benefit in decreasing traffic and increasing livability. And without reducing access.

With so much less traffic we can turn our streets back in to streets. Many can be two-way with a single lane of traffic in each direction. Others can be single lane or pedestrian and bicycle only. Many sidewalks can be widened and what are now extra traffic lanes for through traffic can be converted to local customer parking (and with some possibly angled pull-in instead of parallel).

With such short distances for people to drive within the downtown core, speed limits can be 15 or 20 mph which, combined with much lower traffic volumes and no through traffic, may be appropriate for many Woonerf-style shared roads.

Disruptive? Likely. Good things often are. For individual drivers it should be minimal—at worst a slightly different route. The biggest disruption will be for delivery trucks with multiple stops who will have to make some changes to their routes.

Risky? You Betcha. The big risk is companies choosing not to locate in Saint Paul and people not wanting to live here because they think driving is more difficult.

On the other hand, there’s the probability that people and companies will very much want to locate in Saint Paul because there is less congestion and it’s now a human-friendly environment. It’s more appealing and inviting than any other urban area, not just in Minnesota, but in the U.S. 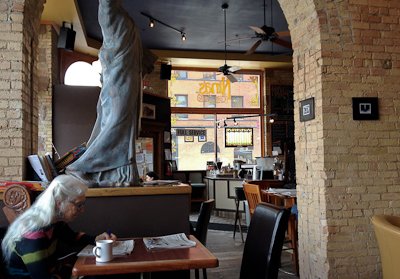 There will certainly be a lot of naysayers screaming about how this will create huge traffic tie-ups. However, it should do just the opposite, reduce traffic on streets intended for local access and put it on roads designed to handle it. It will not reduce car or truck access, but may increase on-street parking.

This is certainly not the safe alternative. Implementing this is risky, but the likely payoff is huge.

And Nina’s? She said those walls would indeed be only be walls, without people—the great neighbors and visitors and employees (and the cappuccinos they make) inside them.

[1] A mini-Minneapolis wouldn’t be terrible. Minneapolis may well become a very inviting city. But Saint Paul can become so much more. More welcoming and inviting and unique and functional. And we don’t need another Minneapolis.

[2] I did a very unscientific study today. I drove up Robert and down Minnesota and up 6th and down 5th and up 7th and down something else. I added to Saint Paul’s congestion for a bit. What I noticed though is that over 80% of the cars in front of me on each of these streets didn’t go anywhere but straight through downtown Saint Paul. They weren’t patronizing any Saint Paul businesses, only driving through.

[3] And if part of Kellogg were tunneled, even better? (And for the wonkier folk, watch ‘A Beautiful Mind’ and then read up on Nash Equilibrium, Game Theory, and Braess’s Paradox.)

[4] I think that in most cases dividing these quadrants between streets instead of on them might be best. East/West streets would be divided somewhere between Robert and Minnesota and North/South streets between 6th and 7th. However, streetcars likely traversing along 7th and Robert may make these much better options.