Mayor Chris Coleman presented a 2012 city budget on August 15 that cuts spending and increases local property taxes — a result of the state’s massive cuts in local government aid. Coleman noted that, “before we could get to 2012, we also had to deal with the $15.6 million hole blown in the city’s budget by the State Legislature” this year, and an additional cut of $12 million in 2012. “That it could have been worse does not give me comfort,” said Coleman.

Coleman’s proposed leaner 2012 budget would maintain the authorized level of 610 police officers, while cutting some civilian positions, reduce overtime for the fire department, and maintain staffing in the County Attorney’s office.

Cuts will hit the libraries (a system-wide reduction of 50 hours) and parks, as well as other city departments, for a total of $6.2 million in cuts. Despite the cuts, the mayor proposed a levy increase of 6.5 percent, saying that, “But for the $15.6 million dollar cut to LGA, I am confident that I would once again be standing before you to propose a zero percent increase in the levy,” as he did last year.

MPR reported on another tax change made by the legislature, this one to the homestead credit rules, which will reduce the amount of money available to cities.

Homeowner tax increases are likelier in low-tax areas and in jurisdictions that are heavily residential, says Steve Hinze, tax analyst for the House of Representatives, who wrote a short analysis of the new rules this week. Hinze says that’s because the new law’s effect on the tax base is greater in those areas than it will be in, say, a community with a big power plant paying lots of property taxes.

The St. Paul Chamber of Commerce issued a press release praising the mayor’s budget, and saying in part:

When politicians ignore long term budget realities and seek short term quick fixes, as we saw with the state budget this session, it simply makes an ultimate solution more difficult to achieve. In the meantime, stopgap measures create uncertainty and discourage investment. We applaud the Mayor for proposing a budget that encourages long-term growth and investment in Saint Paul by addressing the shortfall in local government aid from the state sooner rather than later.

In a Chamber of Commerce survey commissioned and conducted in June, city residents identified their top priorities: 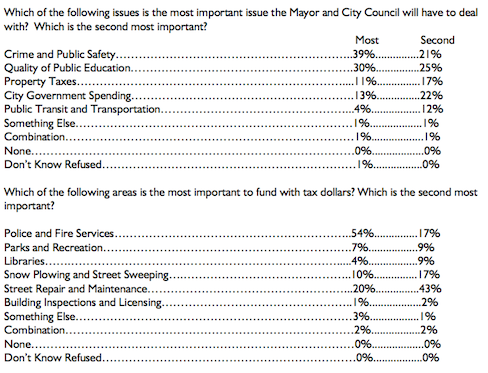