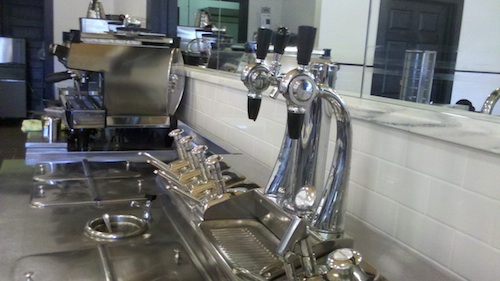 That gleaming chrome dates back to the 1950s, but Lynden’s Soda Fountain will be up-to-the-minute when it opens this weekend, with “super premium” ice cream from The Chocolate Shoppe Ice Cream Company in Madison, Wisconsin and syrups from Brooklyn.

John and Tobi Lynden were putting the finishing touches on the place when I stopped by this week. With partner Matt Miller, they hope to open Sunday, April 15, “if we pass the city inspection.” They’ll serve ice cream and fancy coffees (yes, there’s a large espresso machine, too) in the space formerly occupied by Kopplin’s Coffee.

Along with the coffee (roasted by The Dogwood Coffee Company in Minneapolis), Lynden’s promises free wi-fi access and sodas, egg creams, phosphates, candy and more. If you can’t find an empty bar stool at the counter, there are a few tables, farther back than the shelves of gleaming glass jars filled with candy.

If you need more substantial fare, Casper’s and Runyon’s Nook is right next door, where it has been since 1938. The Nook offers 29 burger choices, including the Joe Mauer Double Play Burger and even a Garden Burger (“You’re in the wrong place for this, but if you must”)

Not far away is one of St. Paul’s oldest ice cream counters at St. Paul Corner Drug, with cones and sundaes and more. You can still get a cup of coffee for a nickel, and one of the six stools at the counter, if you’re lucky. The ice cream counter is not their major business — St. Paul Corner Drug is one of a handful of independent pharmacies still operating in the city, and has been part of the neighborhood since 1922.