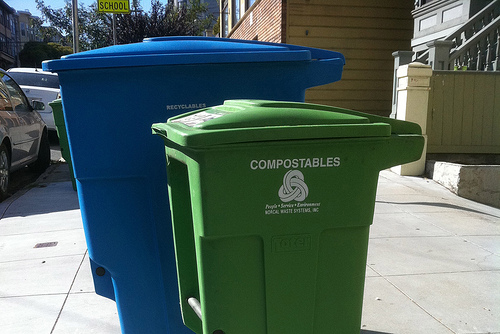 As St. Paul Mayor Chris Coleman goes from coffee house to coffee house talking about next year’s city budget, Eureka Recycling is pushing for a curbside composting plan to be included. Here’s a bit of what one supporter posted on E-Democracy:

Eureka has been working with Saint Paul to develop a plan to increase recycling and composting – to be a national model to recycle and compost 75% of our waste!

This plan includes lots of environmental, economic, and community benefits including lowering your garbage bill, creating local jobs, creating much needed soil, keeping waste out of our landfills and incinerators, as well as improving the quality of the neighborhoods and helping connect neighbors through composting (part of the plan is to implement community-based volunteer teams to help their neighbors compost and recycle with confidence!). (Makes you want to live in Saint Paul, doesn’t it 🙂 )

Curbside composting means that Eureka would pick up bins of compostable garbage (banana peels, tea bags, etc.), just as they now pick up recyclables. St. Paul came close to an agreement on curbside composting in 2008, but plans fell through. A three-month pilot program ran in Mac-Groveland in 2010.

I called Eureka and talked to Diana Kennedy to get the low-down on Eureka’s proposal to the city of St. Paul. (Eureka is a non-profit organization that contracts with St. Paul for recycling.)

Kennedy told me that curbside composting is one piece of a four-part plan. The plan starts with education: prevention education to get people to produce less waste, and trained teams of community volunteers teaching their neighbors how to do backyard composting. The second part of the plan is curbside composting pick-up, using the same trucks and on the same days as current recycling. Part thee is adding more plastics to the recycling pick-up, including most food and beverage containers, but not #3 or #6 (styrofoam), because there is no market for these. The last part of the plan is to simplify to single-sort recycling, so that all paper, plastics, glass and cans would go in one container, and the compost would go in a second container. This would make it possible to pick up all the recycling without adding trucks.

There’s no indication yet about whether the mayor’s budget proposal will include funding for the new plan.