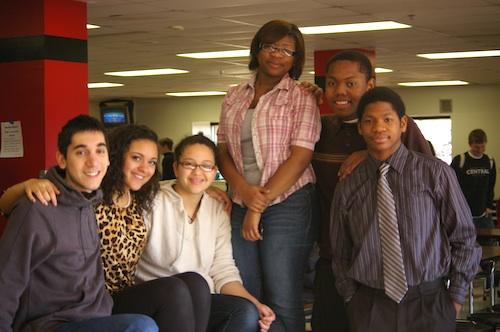 St. Paul Central students and English teachers organized a day-long protest in support of free speech and in opposition to censorship on February 16. According to English teacher Daniel LaMere and student Juan Carlos Ramirez-Rojas, who heads the high school’s Hispanic Culture Club, the trigger for the protest was the recent action by Tucson schools to box up and lock up books such as The House on Mango Street (Sandra Cisneros), Pedagogy of the Oppressed (Paulo Freire), The Absolutely True Diary of a Part Time Indian (Sherman Alexie), and The Tempest by William Shakespeare.

The book censorship is part of the Arizona prohibition on teaching Mexican American studies and on reading anything that might promote resentment toward a race or class of people. (Not that all the authors are Mexican-American — Freire is Brazilian, Alexie is Native American, William Shakespeare is — oh, never mind.)

Teachers had begun organizing in January, after they heard about the Arizona actions.  They have up lunch breaks and preparation time to take turns reading in the lobby, and students signed a petition (see sidebar) asking for an end to censorship in Arizona. According to a St. Paul Public Schools press release, the English teachers said, “We felt driven to do something when a bill in Arizona was passed that would effectively end ethnic studies classes at the high school and university levels in publicly funded institutions in that state. Our English Department wants to stand in solidarity with Tucson teachers and their students at the center of the firestorm.”

An impressive group of students was doing dramatic readings of poetry and fiction at mid-morning. They are students in the intermediate drama class taught by Kimberly Colbert. Colbert explained that the reading was not really about performance, but about honoring writers by “speaking the words that have been silenced.”

The students had plenty to say. Simone Scarafoni had heard about Arizona’s action to ban teaching Latino history, and said the cause was close to him, because his mom is from Argentina.

It’s “kind of ironic to ban books from Latinos because of controversial stuff in poems and plays, when white people in Arizona are actually doing controversial stuff,” said Deja Whitfield, adding that “We need information to make this stop.”

“Information is the number one way to get stuff fixed,” agreed Chava Gabrielle, who thought the book banning was “horrible.”

Ekeylie Lee said she heard about the book banning at her NAACP meeting. “It’s wrong for one ethnicity to have the upper hand, wrong for one to be able to express themselves and the others not be able to,” she said.

Shevell Powell said that the Arizona action was unfair. “We need to learn about every culture,” he said. “We should not ban Latino culture. We need to learn more about it.”

Kalu James Abosi agreed, adding that one of the reasons for learning is that “lots of people are ignorant about their situation,” and that censorship takes away freedom.