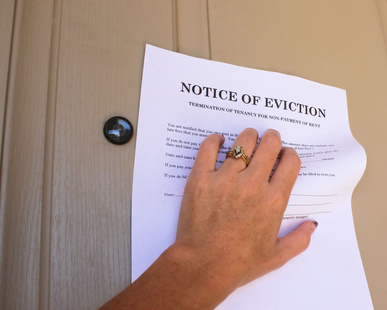 After years of neglect by a notorious St. Paul landlord, after begging for help and seeing their buildings put into receivership, residents at the Westminster Court apartments were hit with 30-day eviction notices from a new owner. Now they are asking the courts and the city council to stop the evictions, with the support of the District 5 Payne-Phalen Planning Council, the Minnesota Tenants Union, and the Asamblea de Derechos Civiles. On Thursday morning, I got a notice of a press conference and “tenant speak-out” set for 5 p.m. I couldn’t go, but I called Leslie McMurtry, executive director of the District 5 Council, and heard more of the story.

Peggy and Randall Chun were the owners of the two buildings as they descended into disrepair and despair, said McMurtry. Back in January, MPR’s Bob Collins wrote:

I’ve seen firsthand the problems at the Westminster Court apartments in Saint Paul …. Squalor is the perfect word for the “problem property” that every housing expert in Saint Paul has known about for years.

The tenants wanted the buildings fixed, not condemned, despite the sub-par conditions. It’s hard to find somewhere to rent in the Twin Cities if you have children or a low income or both. The rental vacancy rate in the Twin Cities is a very low 2.8 percent, and rents are high — an average of $934 per month, according to the Minnesota Housing Partnership.

After court battles, including foreclosure and citations for hundreds of housing code violations, a judge ordered the buildings put in receivership in January. The receiver would oversee management of the buildings, collect rents and make repairs. City officials notified the mayor and city council that progress was being made.

Then, in May, tenants received 30-day eviction notices. Why? The buildings, in foreclosure, had been purchased by Pine Ridge Capital, LLC, which had turned over management to Equimax. They decided the easiest way to clean up and repair the buildings was to get rid of all the tenants and start over. In an article in Finance and Commerce last year, Pine Ridge owners explained:

Jon Taxdahl and Mark Guidinger are looking for a challenge when they invest. They used to work for CarVal, an arm of Cargill’s proprietary high-yield trading operation. Today they’re partners in Edina-based Pine Ridge Capital LLC, specializing in buying distressed properties and making them cash-flow again.  …

Developers like Taxdahl say that buying at $50,000 a unit and renovating can mean a total investment of $70,000 — still about half the cost of building new. Renovations bring in new tenants, which mean steady cash flow.

The District 5 Council stepped in to represent the tenants, under a Minnesota law that allows a neighborhood organization to file an Emergency Tenant Remedy Action on behalf of all the tenants in a building. The petition was filed June 27, said McMurtry, and the judge set an emergency hearing for July 12.

The Emergency Tenant Remedy Action demands that the owners make repairs as ordered by the city departments of safety and inspections. If people are forced to leave, alternative housing must be found, such as an apartment or hotel or motel, with charges prepaid. There are other issues, such as tenants who have leases and those who are owed refunds of their security deposits. What it comes down to is basic fairness — something the tenants at 1205 and 1225 Westminster have found in short supply.