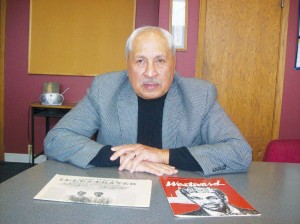 Black folk and their accomplishments in Minnesota too often have been overlooked or undervalued, believes Frank White. For several years now White has been working on several civic projects to spotlight historic accomplishments of local Blacks.

“I think what I’ve learned is growing up here in Minnesota, we [Blacks] kind of knew our place where we lived in the Rondo neighborhood,” says White in a recent interview at the MSR. “I really didn’t know why we couldn’t go way over there [and] I never questioned that.

“Probably the biggest thing I learned is that Minnesota was a very biased state,” continues White. “On one hand, it was accepting of people but on another hand, Jim Crow and bias definitely was here, as it is today.”

White grew up listening to how the experiences of Blacks in the South differed from those in the North. He later understood that both Northern and Southern Blacks had some of the same experiences.

“I came to find out that Black people couldn’t stay in hotels, couldn’t eat in places. The reason why we all lived in the Rondo neighborhood was because that [was] where we had to live.” Born and raised in St. Paul, White easily remembers when as a young man, he and other Black students often were discouraged by high school teachers and counselors steering them toward jobs that did not require a college degree.

“For me the only difference growing up here in Minnesota versus maybe in the South was that we didn’t have signs over water fountains or doors that said ‘Colored only.’ But clearly that stuff was here,” White explains. “I think in my research that is what I continually [want] to find [out] that I probably wasn’t aware of when I was a kid.”

Over the past few years, White has been working on four projects. One is to have honorary street signs placed on the streets now called Ravoux and St. Anthony in the old Rondo neighborhood in St. Paul that was virtually split in half by Interstate 94. These streets are “a significant piece of history that people aren’t aware of,” he points out.

“I think the councilman is very supportive on that effort,” reports Noel Nix, the legislative aide to St. Paul Councilman Melvin Carter III. White says he’s hopeful that the signs will debut this summer during the annual Rondo Days celebration in July. “I think it’s going to be a done deal,” he says.

Secondly, White has been actively involved in having Toni Stone Field, the baseball stadium located at the Dunning Athletic Complex on Marshall Avenue, which the City of St. Paul renamed in 1996, be regularly referred to in all city-published schedules and other information. “I’ve sent some emails to both the City and to the school district, and challenged them that had [the stadium] been named after a White person, they would have been calling it by that name,” he bemoaned. “The city hasn’t done enough” to emphasize the name change, believes White, who says a plaque and sign installed at the field “is a done deal.”

“A lot of people don’t know who Toni Stone is,” admits White. “Here’s a woman that not only was the first woman to play in the Negro Leagues but also she received other awards [as well].”

His third project concerns the Jimmy Lee Recreation Center. White says that most people, including those who regularly use the facility, don’t know Jimmy Lee’s historic place. He is working on placing a photo of Lee inside the center in St. Paul “so when people walk in that building, people can see a picture of this African American man and more of his accomplishments up there than they [currently] have. This guy truly has a legacy as an athlete and as an individual.

“Toni Stone [Field] and Jimmy Lee [Center] are named after African Americans but no one knows who they are because we have allowed people to shuffle the history, or no one has taken the time to say what they really accomplished,” states White. “I’m fortunate to be in the right place to be able to help correct that.”

White’s fourth project is working with Bloomington city officials to install signs on Dred Scott and “to increase the awareness and education of Dred Scott” at Fort Snelling. “There is no signage out there that says who Dred Scott is… A lot of people don’t know who Dred Scott is,” he notes.

Not only is Scott’s ordeal significant to Minnesota history but also U.S. history as well. Though unsuccessful, he argued in court that he was a free man and should not remain in slavery after having lived in free territories such as Minnesota. White is currently working with officials from the Minnesota Historical Society, Bloomington Human Rights Commission and the Bloomington School District to install a plaque or signage on Scott and his story.

“We are really collaborating on this huge event in May” which will include re-enactments of the Dred Scott trial for students and the public.

This is the first of five stories that will appear during the month of February in recognition of Black History Month describing Frank Whites projects and the historical background behind them.