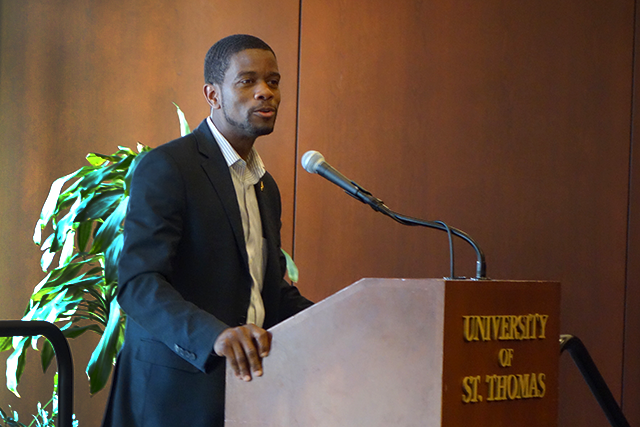 At a Midway Chamber of Commerce economic development summit, St. Paul Mayor Melvin Carter said that the city will adopt a minimum wage of $15 – legislation he hopes to sign by the end of the year. Mayor Carter described the issue as “already decided.”

Mayor Carter also extended an invitation to those already working for a $15 minimum wage to join in the discussion.

“I’m inviting everyone into the conversation,” Carter said. “I want those folks in our advocacy community and our labor community to see that we are acting deliberately and intentionally to respond to that urgency, but I also want the whole community to know that we are being very deliberative, that we’re thinking through all these questions.

Garnering bipartisan support, a new task force could examine the root causes of the disproportionate violence done to Native women in Minnesota. As of now, the homicide rate for Native women is seven times that of the rate for white women, a staggering difference. The task force would collect data on missing and murdered women in order to decide how best to tackle this issue.

“It’s a devastating reality that our Native American women are going missing and murdered in some of the most violent ways,” said Mary Kunesh-Podein (DFL-New Brighton), a member of the Standing Rock Lakota tribe and the author of the bill.

New legislation could improve the childcare crisis in Minnesota, as many parents, especially in rural communities, struggle to find reliable, affordable childcare options for their children. The new bill would include facilitating planning processes for rural communities to develop a community solution action plan, providing resources to established childcare businesses and more.

“We need to rewrite the narrative about child care in Greater Minnesota –— all of Minnesota, frankly –— these businesses are businesses, they’re enterprises,” said Scott Marquardt, vice president of the Southwest Initiative Foundation. “They employ people just like restaurants, just like manufacturers. We need to rewrite the narrative for providing the respect that child care providers and the support organizations need, and this bill will do that with the investments that are being made in there.”

Find out the full details of the plan at Session Daily.