Butler, himself, called his proposal to the Council’s Budget Committee “detestable,” but said deep cuts to LGA – funding the state provides cities like St. Paul to help support critical services – made by the Legislature this summer will force city council members and Mayor Chris Coleman to make difficult decisions.

LGA cuts “force us to take last year’s budget and reduce it by X amount, and we’ve been doing that for years,” Butler said. “It’s wrong. It should be (about), what do you need?” 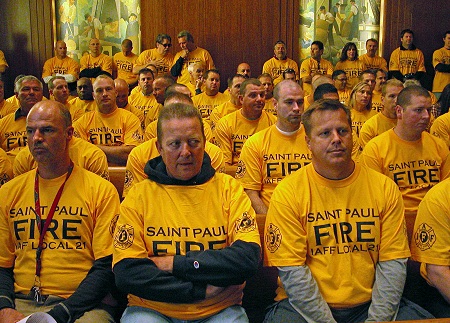 St. Paul Fire Fighters Local 21, though, presented the Council with its own proposals for raising revenue to support the fire department. They include expanding services to neighboring cities, including Maplewood, and charging for-profit organizations for paramedic staffing at events, similar to the revenue the police department receives for security service at for-profit events.

The union also proposed raising $700,000 from a $25-per-student surcharge for fire protection and paramedic service at the seven private colleges and universities within St. Paul’s city limits.

“These institutions pay little to no property taxes to the city, but enjoy full use of our fire and paramedic services,” Local 21’s proposal says. “In this economic climate, everybody needs to chip in to maintain essential services.”

At the very least, the union said, it wants to be a part of the discussion regarding the department’s 2012 budget.

“We believe that the budget process can benefit from our perspective, which is where the ‘rubber meets the road,’” union officers wrote in a letter to the council members.

Council Member Pat Harris seemed open to the union’s recommendations – or any proposal that would stave off the service cuts put forth in Chief Butler’s budget proposal.

“When one of our department heads, your chief, comes in and says these cuts are detestable, it’s our job to find a way to reverse that term,” Harris said.