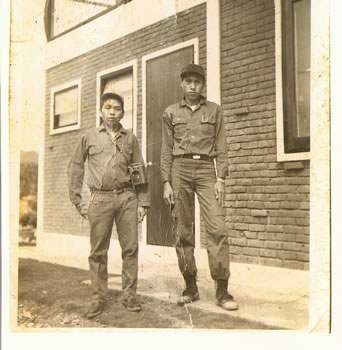 A faded photograph recalls the 'secret' war in Laos.

When Jonah Xu Yang was 22 years old, he had already been a seasoned soldier fighting for the French military in Indochina. Nao Kao Lyfoung was just 13 when he joined the French army. Then in 1961, both joined the Special Guerilla Unit or “SGU” of the Royal Lao Army, fighting alongside the United States against the spread of Communism in Southeast Asia. Both men quickly rose through the ranks and survived some of the heaviest fighting in and around the Plain of Jars in northern Laos, a strategic area in the war against North Vietnam’s aggression. In 1975, Laos fell into the hands of the Communist forces. Col. Yang and Lieut. Col. Lyfoung have since made Minnesota their home.

More than 50 veterans and their families will be honored along with Yang and Lyfoung, who are 75 and 68 years-old respectively, at an event to be held at the Hmong American Center in St. Paul’s Eastside on Saturday, July 22.

The event, “Celebrating National Lao Hmong Recognition Day,” is sponsored by the Minnesota chapter of the Lao Hmong American Coalition (LHAC), and supported by local Hmong American businesses, individuals and organizations, and is expected to draw 400 people.

“We are honored and excited to host this special celebration to pay tribute to and remember our fallen comrades as well as the living heroes of the war in Laos,” said Charles Vu, who heads the local chapter of LHAC, a national veterans non-profit organization serving the veterans and their families who fought alongside the United States in the Secret War in Laos from 1961-1975.

In addition to the veterans, their families, and the at-large community, Vu states that local, state and federal elected representatives, including St. Paul Mayor Chris Coleman, Minnesota State Senator Mee Moua, as well as Minnesota State Representative Cy Thao, will also take part in the celebration to recognize and honor the sacrifice and service of those who served in the war in Laos.