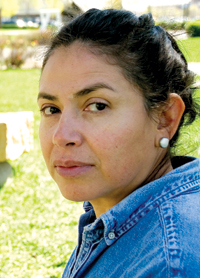 The interior of artist Lourdes Cué’s Prospect Park home is awash in dark yellow and orange; rough-hewn chairs and cabinets line the rooms; the kitchen counter tile is the color of old wood or burned desert rock. “I tried to bring a little of Mexico in,” she said.

Cué has lived in Minnesota for the better part of 20 years and has owned the house for ten; during that time she’s done extensive remodeling to create a home reminiscent of her beloved Mexico—the land where she was born, raised and trained as a sculptor, and where she still spends half of each year.

In mid-April, Cué returned from her Oaxaca home to prepare for Minnesota Rocks!, St. Paul’s first International Stone Carving Symposium. Cué is one of 14 stone carvers—six from Minnesota and one each from Mexico, Germany, Japan, Zimbabwe, China, Finland, Egypt and Italy—who will work for six weeks, five days a week, eight or more hours a day, on the lawn of St. Paul College. The finished sculptures will be placed in public spaces in St. Paul, St. Anthony Village and Vadnais Heights.

Water and stone
Just as Mexico has influenced Cué’s Minneapolis home, Minnesota has influenced her art. The Mississippi River runs along the edge of Cué’s neighborhood; the lush, water-heavy landscape contrasts with dry and rocky Mexico.

“The first time I was invited in Mexico to do a show, I created this installation with water and granite, and people were asking me where did the water come from,” said Cué. “And I didn’t know. Then eventually it clicked.”

Cué finds inspiration in other natural forms, too. One sculpture, the Garden of Forking Paths, which was on display at Franconia Sculpture Park for two years, was a scatter of leaves—each made from stone slabs fitted into a multi-stemmed branch. The largest leaf was about 10 feet long, she said. At a symposium in Scotland she carved Windows on the Sea, a series of three rectangular blocks, each with a narrow window looking onto the North Sea. That piece was inspired by the local ruins, she said.

Cué has no idea what she’ll carve at the St. Paul symposium: the artists were asked not to plan ahead or even think ahead. Christine Podas-Larson, president of Public Art Saint Paul, the group that organized the event, explained this approach in an e-mail:

“Fundamental to the Symposium idea is human ‘conversation’ with stone,” she wrote. “Artists confront this ‘obdurate’ material and have to come to terms with it—to let it speak to them of what is locked inside. That idea is compromised if artists come to the Symposium with a preconceived idea of what the stone will have to say in this ‘conversation.’ Until they meet together on the first day of the Symposium, the artists will not even know which stone they will work in—limestone, granite, quartzite and stromatolite are all available.”

This suits Cué just fine. “I always think the earth or the land has memory,” she said. “So I work with that idea. I always try to find that voice in the landscape.”

Hammer and chisel
Once the artists choose their material and pick a site for their finished piece—from about 30 possible locations—they’ll pick up their tools and get started.

Cué might use a pneumatic drill to split the stone, but she’ll do most of her work the old-fashioned way: with hammer and chisel. “I find that I can work faster with my hands,” she said. “Carving by hand is easier for me because I know where it’s going and it gives me the time, or the parentheses, where I’m thinking what’s going to happen later.”

Many of her symposium colleagues will favor what Cué calls the heavy machines. “I think boys like big machines,” she laughed.

In stone carving, skill is more important than muscle, said Cué, who will be the only woman at the symposium—a first for her. “I think the strength is here,” she said, pointing to her head. “Obviously your head is right in your hand [as you work]. It’s just the skill, it’s not the strength.”

The symposium will give Cué a chance to carve outdoors, which is something she rarely does these days: neighbors don’t like the noise and the dust, so she’s limited to carving very small stone pieces in her studio. She’s also looking forward to the camaraderie. “It’s a wonderful experience to be part of different cultures, different ways of translating your surroundings into a final product and to know the different steps the sculptors take to reach that goal,” she said.