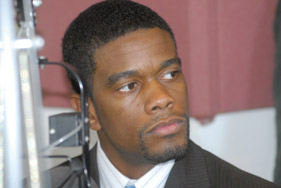 St. Paul councilman Melvin Carter III is vacating his seat on the St. Paul City Council to take a position with the Minnesota Department of Education.

Carter, who is in the middle of his second term as the Ward 1 councilman, will be stepping down to become the director of the Office of Early Learning (OEL). The outgoing councilman’s last day in office is July 5. He starts in his new role with the OEL on July 15.

“This is exciting. I’ve been focused on education throughout my time in office so when (Minnesota Department of Education) Commissioner Brenda Cassellius called (to offer the position), it was a hard thing to turn down,” said Carter, who holds a bachelor’s degree in business administration from Florida A&M University, and a Master of Public Policy from the University of Minnesota’s Hubert H. Humphrey Institute of Public Affairs.

“Melvin brings extensive leadership experience, broad connections to our communities and a passion for excellence to this new role,” said Minnesota Department of Education Commissioner Brenda Cassellius in a written statement. “His tireless work on behalf of the residents of Saint Paul has made a tremendous difference for so many. I look forward to working with him as he turns that passion toward ensuring every Minnesota child gets a great start.

“Councilmember Carter is a close friend and a fearless advocate for Ward 1 and the rest of our city. On behalf of our city’s residents, I thank him for his dedication and tireless service to this community,” said Coleman in a released statement. “At the Office of Early Learning, he will have the unique opportunity to have a far-reaching impact on the lives of our young people. Anyone who knows Melvin understands this is a deep passion for him. I join with his colleagues on the Council in wishing him the best in his new role.”

Though Carter’s term was not set to expire until 2015, he said by taking on the role of director of the Office of Early Learning he’s continuing his commitment to his constituents.

“When I ran in 2011, I asked the voters to give me an opportunity to get our kids to receive a better education,” said Carter. “This move is enabling me to continue that on an even deeper level. I’m really grateful for the opportunity to serve my ward (as councilman) and St. Paul and I’m proud of the things we’ve been able to accomplish. I’m excited for the new challenge I’m taking on.”

The Saint Paul City Council is expected to nominate and approve an interim appointee for the Ward 1 seat. If the Council does not approve an interim appointee within 30 days, the mayor has 10 days to appoint an interim council member. Because the seat will be vacated within 180 days of a general election, candidates for the Ward 1 seat can file to fill the remaining two years of the term and will appear on the November 5, 2013 general election ballot.