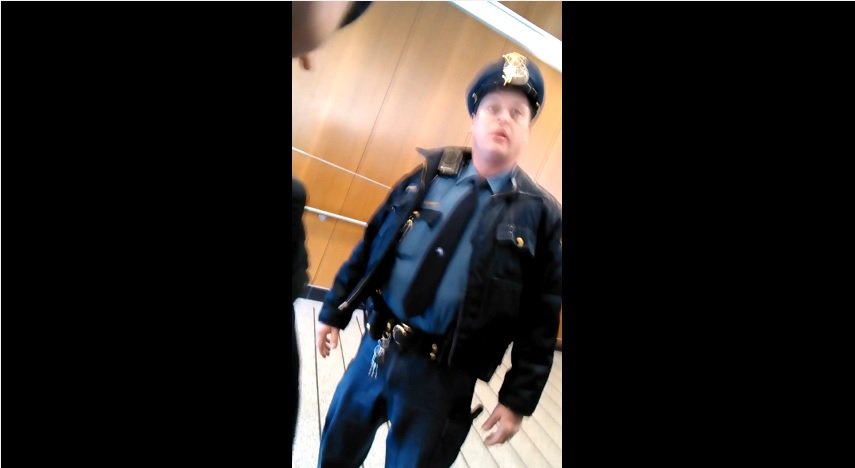 UPDATE: Christopher Lollie, the man identified in the video claims charges against him were dropped. Read more here.

A video showing the arrest of a black St. Paul man for allegedly sitting in a public space and refusing to give up his name surfaced yesterday, Aug. 26 — only weeks after the fatal shooting of an unarmed black teenager in Missouri re-sparked the national debate on race and police profiling.

The video, shot by the man’s cellphone, shows his interaction with officers as he attempts to pick up his children from New Horizon Academy in downtown St. Paul. As the officers force the man to put his hands behind his back, he drops his phone and the video goes black, but the audio continues and we hear the man crying for help and proclaiming that his kids are watching. Both officers in the video are white.

From the following dialogue, it appears the police were called by a store clerk, who was upset over the man sitting in front of his store. The man in the video tells the officer he was sitting in front of the store for 10 minutes as he waited for his kids to get out of school, and that the area is public and he had a right to sit there.

“The problem was —” the female officer begins.

“The problem is I’m black,” the man fires back. “It really is, because I’m not sitting there with a group of people. I’m sitting there by myself. By myself, not causing a problem.”

Eventually a second male officer approaches the man in the video and attempts to restrain him.

“I’ve got to go get my kids,” the man tells the second officer, pulling his arm away. “Please don’t touch me.”

“You’re going to go to jail then,” the second officer says.

“I’m not doing anything wrong,” the man replies.

At this point, both officers grab the man.

“Come on brother,” the man says, “This is assault.”

“I’m not your brother,” the second officer replies. “Put your hands behind your back otherwise it’s going to get ugly.”

Eventually the officers start to cuff the man and he drops his cellphone and the video goes black.

“I haven’t done anything wrong!” we hear the man yell. “Can somebody help me? That’s my kids, right there! My kids are right there!”

“Put your hands behind your back!” the male officer screams.

We hear the flicker of a Taser and the man screams out. As they move away from the cellphone, the man continues to plea to passersby to help him.

In the distance the scene calms down and the man continues to explain to the officers that he still hasn’t broken any laws, that he stayed calm, didn’t curse and wasn’t attempting to flee — making cuffing him and tasering him unnecessary.

“I didn’t do anything wrong. I’m a working man. I take care of my kids. And I get this?” we hear him say. “And you tase me. For what? I don’t have any weapons. You’re the ones with the weapons here.”

Watch the video below:

Correction: A previous version of this story stated the incident took place in Minneapolis. The video was shot in St. Paul.