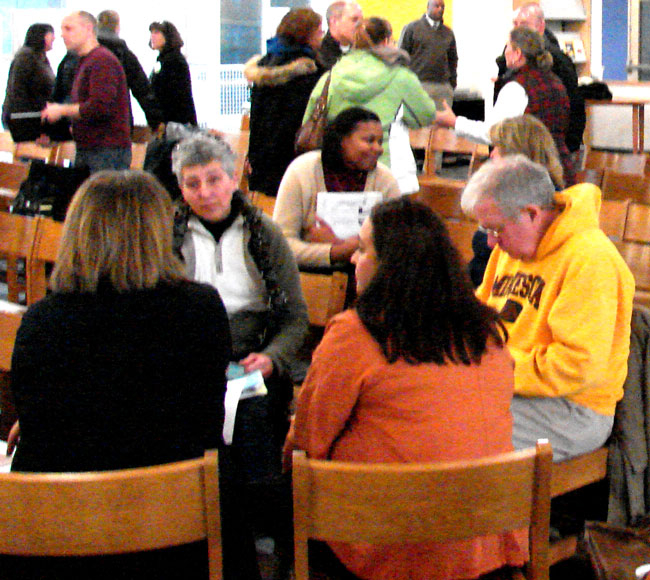 The second of five community information sessions on Saint Paul Public Schools’ “Strong Schools, Strong Communities” proposal was held on February 5 at the Paul and Sheila Wellstone school.  The room was set up to handle a larger crowd than the 30 or so parents who attended, flanked by almost as many eager representatives of the district.  This session was held in the newly defined “Area C,” roughly the North End neighborhood in Saint Paul.

The atmosphere was casual and friendly, with little formal presentation and a lot of time for questions from the audience.  Most of the concerns came from parents wanting to know how their families would personally be affected by the changes.  “There will be no change for you,” was almost invariably the answer for all of the questions as they came.

The most heated questions came over the many changes to the East Side of Saint Paul.  “Why is it that the only Spanish Immersion option in secondary school would require me to drive my kids over the west side?” asked one parent, “Where is the equity?”

District immersion expert Cathy Camarena understood how popular these programs are, but stressed the need for quality instruction – “We can only have one secondary program citywide, and there is limited staff qualified to teach math and science in a Spanish Immersion school.”

Managing scarce resources was only part of the driving force of the sweeping changes that are being proposed.  Staff constantly stressed how the new system was streamlining choices for parents and making the system more transparent.  A lot of time was spent explaining the “Pathway,” or default middle and high schools that every address in the city would have under the new plan, compared to the “Articulation” that students in magnet schools would have as their natural progression after elementary school.

Despite all the changes, district officials emphasized constantly that the proposed system was much simpler than the current “choice” system.

After the larger Q&A session, the meeting dissolved into smaller group discussions, often nearly one-on-one, as the assembled staff worked to make sure that questions and concerns were met.  Nearly everyone appeared satisfied with the information they received.

“I do worry about having diverse schools that provide all kids with the important lessons of life,” said Expo Elementary parent Deb Konechne after the meeting.  “If all of our schools are going to rise together, socio-economic diversity is important.”  She added that she likes the current system of citywide magnet schools with many options for parents.  “Schools need to understand the power of our diversity and appreciate each child’s creativity,” she said. For now, she was happy to have more information.

School board member Anne Carroll was also on hand after the meeting.  “This plan creates many more opportunities, and the Pathways give families clear, understandable choices,” she said.  She also stressed how the district is using its website to make options available to families clear and concise.

Other community information sessions are:

The Board of Education is scheduled to vote on the plan on March 15.