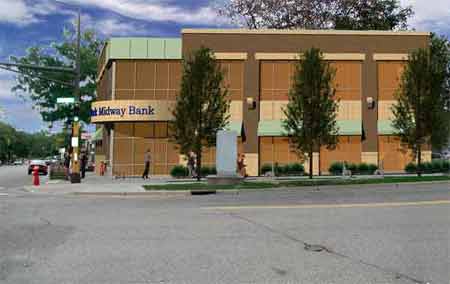 This spring it was back to the drawing board for Park Midway Bank. A February public meeting drew reactions to its plans for a new building at 2300 Como Ave., where its drive-in facility is currently located. On July 13, the bank presented a revamped site plan and building design to the District 12 Community Council.

Rick Beeson, bank president, said that the formation of an advisory committee helped the bank fine-tune its plans. He pointed to three significant changes in the original design.

The new design for a two-story building on the southeast corner of Como and Doswell features a lower tower (28 feet) than the original plan (48 feet). In addition, a canopy over the drive-in exit on Como has been pushed back from the sidewalk to create a less monolithic face to the building. Finally, the original windows, intended to echo those of the nearby library, have been redesigned.

Beeson said that demolition of the existing drive-in bank will begin after the State Fair. Construction of the new 16,630-square-foot building is expected to take 10 months, and the bank hopes to occupy its new quarters by August 15, 2007.

During construction, the sidewalks along Como and Doswell adjacent to the site will be closed, and no street parking will be allowed. A temporary drive-in lane will be created in the southwest corner of the parking lot.

Beeson noted that Park Midway would be one of only 10 LEED-certified bank buildings in the United States, and the first in Minnesota.

“Getting a building LEED certified means additional expense,” Beeson said, “but we view it as an investment, not a cost. We’re here for the long haul.”

Beeson also expressed hope that the bank’s example would serve as an incentive for future developments in the area. “I’d like to see all new buildings in the community be LEED certified,” he said.

At the July 13 meeting, landscape designer John Thomas described plantings for the new site. Existing plants will be donated to the St. Anthony Park Garden Club.

Beeson said it was natural to approach Thomas, who lives across the alley from the current drive-in bank, for advice on landscaping the site.

“John had already worked with us on beautifying the current site, and we had a good relationship with him,” Beeson said.

Vice President Connie Powell described the bank’s plan for an espresso bar in the new building. It would be staffed by bank employees, and proceeds would be donated to local community groups.

Powell said the new bank will have two greeter/receptionists so customers won’t have to wait to have a question answered or be referred to a personal banker. That change, along with a spacious lobby and the coffee bar, should make for an inviting atmosphere, she said, concluding, “We think the new building will exude warmth and comfort.”