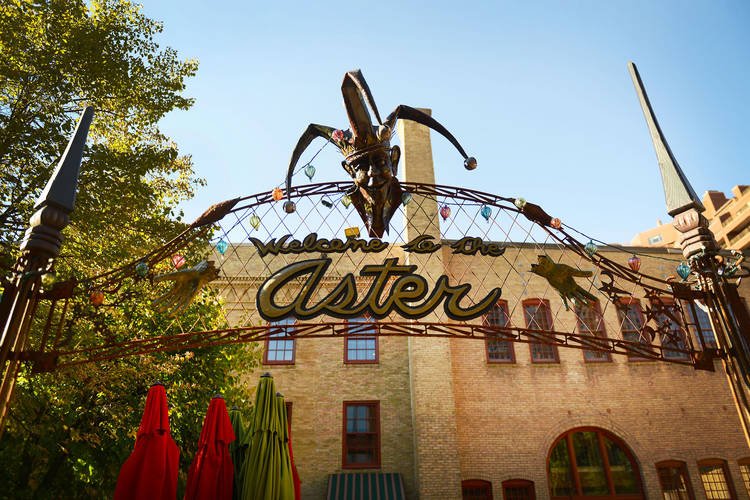 The entrance to the Aster Cafe patio on Main Street on Sunday, Oct. 27, 2013. After a water pipe burst Sept. 5 and forced many small businesses to close, Aster Cafe used the time to revamp its outdoor appearance by reconstructing the patio. (Photo by Holly Peterson)

Morrow Accident Rehabilitation Center employees rushed in to salvage equipment from their flooding building. After an employee unplugged a computer, electricity shot through the water, and employees had to evacuate the building.

“The water was rushing like a river,” Morrow owner Angela Schulz said.

Most small businesses on St. Anthony Main are just now back to normal after a water main burst on Sept. 5 and drowned their establishments.

As water rushed through the historic corridors, it submerged all of Morrow’s patient records and medical equipment, flooded Aster Cafe’s kitchen, soaked some of Cunningham Group Architecture’s models and destroyed 28 of the Segways belonging to Mobile Entertainment, a tour company.

City of Minneapolis spokesman Casper Hill said the city shut off the water following the break but didn’t make any repairs.

The St. Anthony Main Phase II Partnership owns the pipe that broke, according to John Rimarcik, owner of the building that houses the Aster Cafe. Rimarcik said no particular party is to blame for the flooding. The owners of the pipe could not be reached for comment.

Schulz said she came in to check on her business at 4:45 a.m. that day.

“They were taking
garbage canisters and just grabbing everything and throwing it out. I lost everything,” she said.

Morrow said she was out of business for almost a month and lost more than $100,000 worth of equipment, supplies, furniture and business from the flood. Schulz said she had to cover two-thirds of the losses out-of-pocket because insurance only covered part. Things are returning to normal now, Schulz said.

All businesses relied partially or wholly on insurance to repair their losses.

Hill said the city’s plumbing is getting older, but residents shouldn’t worry.

“We have water mains that are growing old and are doing just fine,” he said.

He referenced a break in January, when construction equipment struck a water main and flooded a busy downtown street. Cunningham Group Architecture reopened three hours after the break, associate principal Julie Lang said. Cunningham’s basement flooded, damaging their model archives, Lang said. The firm is currently freeze-drying the models to see what they can salvage.

Businesses use flood to improve

Aster Cafe reopened on Oct. 10 after closing for almost six weeks to repair damage from the break.

Manager Michelle Coy said the café rebuilt its entire kitchen, rebuilt its patio and replaced all of the flooring.

The break only knocked Mobile Entertainment out of business for two hours. Owner Bill Neuenschwander said the business moved into a covered walkway outside the St. Anthony Main Theatre to keep the tours running.

Neuenschwander said he had to replace $180,000 worth of Segways after the flood, 12 of which were brand new. Neuenschwander also increased his staff by 25 percent and said he plans to expand in the spring.

Neuenschwander said they don’t do tours in the winter, so they can wait to expand.

“We’re not pushing our landlord to build our space out to get right back in business because, really, it’s not that critical for us at this time,” he said.

Coy said customers dropped off flowers and gave the employees food and gifts during the remodel.

“Everyone in the building has stopped in to see how each other is doing,” she said.