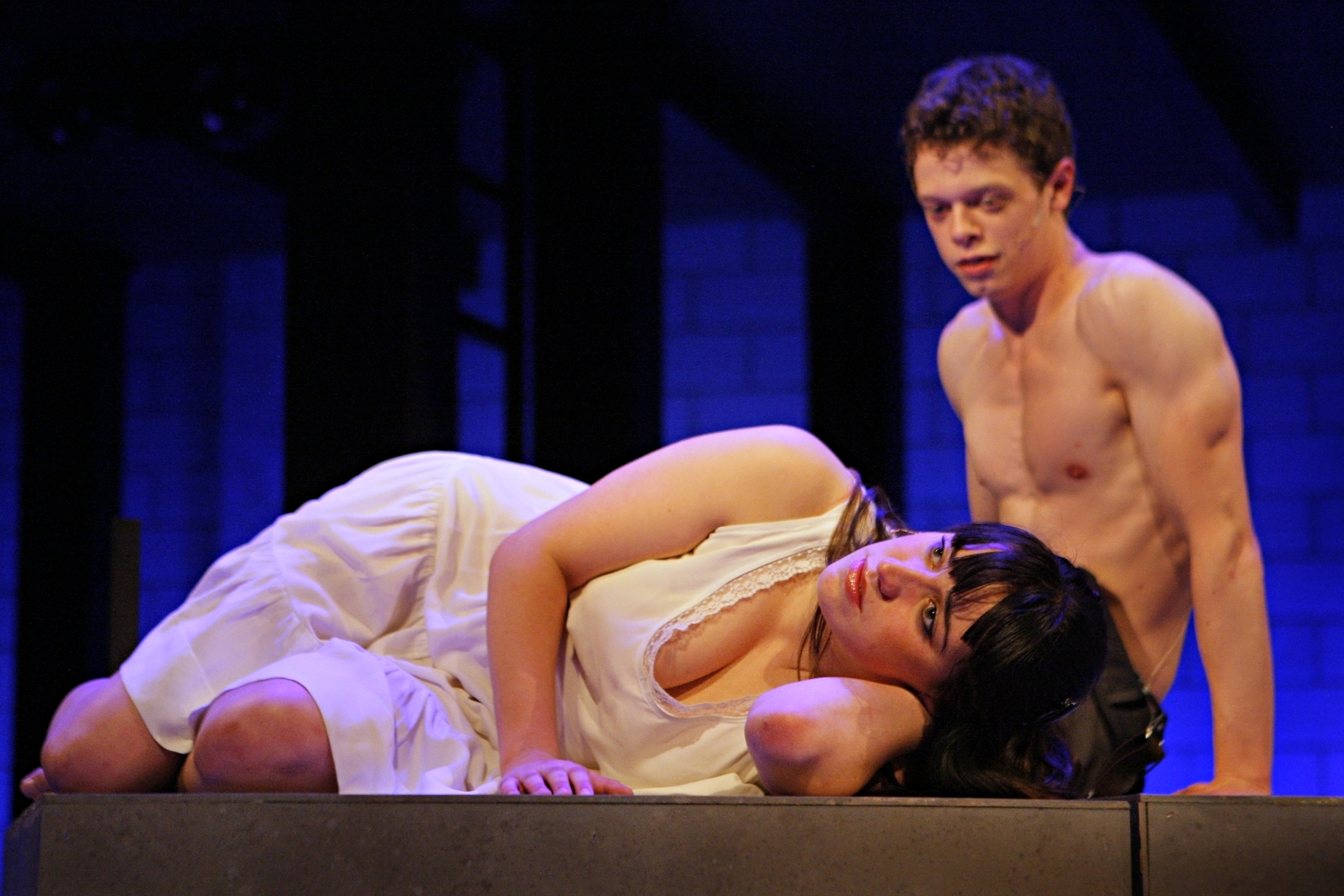 If you’re in need of a jolt of adrenaline in your entertainment, see the musical version of Spring Awakening currently on display from Theater Latté Da and the University of Minnesota Theater Arts & Dance Department. It’s a welcome reminder of what sheer joy looks like on stage, and what a play can do to an audience when it’s fully and vibrantly alive.

(Honestly, just skip the rest of the review and go see the thing.  If you really need convincing, read on…)

Underage sex, masturbation, incest, suicide, homelessness, child abuse (physical, emotional & sexual), back alley abortions, sadomasochism, homosexuality. When Frank Wedekind first wrote the play Spring Awakening back in the early 1890s, it spent more time being banned than performed. It was only published when Wedekind put up his own money to do it. The play was a controversial stew of issues which added up to a stinging indictment of a sexually repressed society willing to sacrifice its own children on the altar of ignorance. If children had the smarts and the gall to go learn about sex for themselves, they were abruptly criminalized and set adrift to fend for themselves on the streets.

Wendla (Cat Brindisi) knows too little about the realities of sex. Melchior (David Darrow) knows too much. Neither of them has any idea how to process the emotions which overwhelm them as they grow closer and closer with each encounter. Ultimately they manage to form a genuine bond between them that transcends their physical relationship, but the adult society around them is remarkably efficient at keeping them apart.

Meanwhile, Melchior tries to counsel his best friend Moritz (Tyler Michaels) on how to survive school, and of course puberty. Moritz tries his best on both counts but again the adults in his life both at school and at home seemed to be lined up against his succeeding.

I was already familiar with Wedekind’s play from my own theatrical past but I went into the performance of the musical with no prior knowledge. My fears about the translation of this story  to the musical theater genre were unfounded. Book writer and lyricist Steven Sater does a great job adapting the original text, remaining true to its spirit (and nearly all the elements of its overstuffed plot). Composer Duncan Sheik’s pop-rock sensibility makes for catchy melodies both bombastic and lyrical. (I freely admit that I immediately downloaded the cast album when I arrived home after the show.)  It’s easy to see why this thing cleaned up at the Tonys during its original New York run (eight awards out of eleven nominations). In a way I’m grateful I missed out on seeing the touring company because I can’t imagine it being as thrilling as the intimate staging the musical gets here from Latte Da at the U of M’s Rarig Center.

Director Peter Rothstein gets deeply felt performances from all his actors. The reason the audience cares about all these kids and what happens to them is that they are so achingly real.  Music Director Denise Prosek gets equally remarkable singing performances from the cast. (Yes, they’re mic’d but you’d have to be when this band is rocking out: Prosek, Greg Angels, Sophie Deutsch, Steve Grisdale and Geoff LeCrone).

And the choreography, oh, the choreography. Carl Flink has these kids stomping and leaping and flying and climbing on anything that will lift them off the ground and into the air. It’s a powerful, athletic, often gravity and sense-defying set of physical pictures on stage that keep building until it’s all you can do to stay in your seat in the audience. I always appreciate theater, no matter the product. I’m rarely excited by it. Rothstein, Prosek and Flink and their ensemble created an evening of theater that excited me, because it reminded me what theater can do if you don’t hold anything back.

Spring Awakening is not for the faint of heart. That laundry list of incendiary topics at the beginning of the review wasn’t random. The script contains all of that and more. In addition to the triumphs and travails of Wendla, Melchior and Moritz, their schoolmates have several compelling subplots of their own. Martha (Rebecca Wilson) reluctantly reveals to her friends that she is being beaten by her father, but what she doesn’t share with them is far darker. This parallels the story of their former friend, and now cautionary tale, Ilse (Larissa Gritti), tossed out by her parents and now bartering her body at a nearby artists colony to keep a roof over her head, clothes on her back and food in her stomach. Gritti’s Ilse sings movingly of innocence lost, and this drives her to reach out and try to save her old friend Moritz in his time of need.

On the lighter side, Wedekind’s original scene of teenage boys kissing has blossomed into a comic (yet still respectful) subplot. Hanschen (Grant Sorenson) patiently (but doggedly) pursues Ernst (Jack Tillman), the strapping object of his desire. He doesn’t have to work too hard to pursue the boy. Hanschen and Ernst’s reprise of Melchior and Wenda’s love song from earlier in the play is one of many clever touches in this musical adaptation of which the production makes full use. And though Darrow shows the most skin (hence the nudity warning), it’s Sorenson who takes the prize for most brazen. Sorenson spends a large amount of stage time in an early musical number unrepentantly masturbating under his nightshirt (even wiping his hand off at the end so we know he’s done). (Like I said, not for the faint of heart. A lot of the language in the dialogue and lyrics is very frank and adult.  But if you meet this production on its own very human terms, you won’t regret it.)

One of the wonderful surprises of this production is the work of James Detmar and Michelle Barber as all the many adults in this play’s universe.  This is part of the reason I don’t always peruse my program ahead of time. I like to be caught off guard. The realization dawned on me slowly. “Holy crap, that guy is all the fathers, the male teachers, the preacher, the doctors. And she’s all the mothers, and the female teachers.”  Their chameleon-like acting chops, aided by Rich Hamson’s many clever costume choices, made me forget time and again that they were all the same two people. Funny and scary and even sympathetic, Detmar and Barber created their own ensemble of characters within the larger ensemble cast. Great work, and a real kick to watch in action.

A quick shout-out to Jonathan Offutt, both set and lighting designer here, who takes a two-tier set of simple black planks of lumber and transforms it over and over again with some truly stunning and beautiful stage lighting. His work gives these beautiful people an even more beautiful environment in which to exist, even when things turn a little metaphorically dark.

And I can’t say enough good things about the trio at the center of all this overheated madness. Cat Brindisi’s Wendla may be ill-informed but she’s not stupid. This is a girl who knows how to go after what she wants. She may be victimized but she’s no victim.

Tyler Michaels gives poor beleaguered Moritz a way to fight back, even if it’s only in his mind. Inside his songs, both emotionally and physically, he takes flight. Michaels’ dance background shows in a big way, and he’s got a voice to match. His performance is inspiring to watch, and makes it all the more heartbreaking when the world keeps trying to beat Moritz down.

Now that I know David Darrow can sing as Melchior just as well as he can act and direct both classical and modern plays, I’m starting to wonder if there’s anything this guy can’t do. With work this engaging, I’m more than happy to sit in the audience and watch him add to the list.

I thought the radical change to Wedekind’s climactic graveyard scene would bug me, but it was a beautiful way to tie the three close friends back together again and give Melchior the strength he needed. The additional modern day coda to the evening probably should have bugged me, too, and yet I found myself loving it.  Because let’s face it, the issues these characters are struggling with haven’t changed in over a hundred and twenty years. A lot of these battles seem even more intense now than even when the musical version first hit the stage just five years ago. We could all use a powerful injection of hope into this mess. And that’s exactly what Spring Awakening gives us.