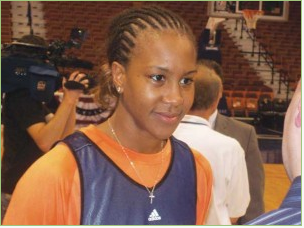 Nate Parham of Swish Appeal places at the top of his list the Indiana Fever winning the 2012 WNBA championship. “I think Tamika Catchings [the finals MVP] has done so much for women’s basketball…throughout her career. I think the entire women’s basketball world was rooting for her to win a championship. People are comparing it to LeBron James [winning his first NBA title this year].”

Baylor’s undefeated season “obviously was a huge story,” Parham says. And although the Minnesota Lynx became the first defending champion to lose in reaching the WNBA Finals since Detroit in 2007, they were among “a lot of interesting short stories” this year, continues Parham. “I think people like the story of the Tulsa Shock on how hard they played during the season. Nneka Ogwumike was a great rookie and [has] a chance to be one of the top power forwards in the league.”

“I thought the whole concussion issue…that has been happening in the NFL was one of the main stories happening throughout the entire year,” adds Littal. “I also thought that LeBron finally getting that championship ring along with the Olympics — getting that monkey off his back was a huge story as well.”

He also believes that the NHL lockout has been underreported to date, says Littal. “I haven’t heard…anybody talk about it except the die-hard hockey fans.”

Both Littal and Parham offered their 2013 prognostications.

“I’m really interested [in] if [quarterbacks] RG3 [Robert Griffin III] or Andrew Luck make it into the [NFL] playoffs,” surmises Littal. “You rarely see high draft picks like that get into the playoffs in their first year. I don’t think a number one [Luck] even had a winning record in his first year or even a number two [Griffin].

“The Lakers…can they pull it together,” asks Littal. “Is LeBron a one-hit wonder or will he get on a run like the Jordan’s and the Kobe’s and the Pistons of years past and win multiple championships in a row? Is Tiger Woods ever going to come back? I think [there’s] a big story if [a knockout] can happen to Pacquiao: Is it possible that could happen to Floyd [Mayweather]?”

“[Brittney] Griner’s transition into the WNBA [next spring] will be a big deal,” adds Parham. “It is an opportunity for the league to get a little more prominence,” noting that ESPN will be showing the 2013 draft in prime time. In women’s college basketball, “I think there are some teams across the country that are taking a step forward,” he believes.

He surmises that the Lynx’s 2012 finals embarrassing loss that “nobody predicted” could be a blessing in disguise. “I think the Lynx losing actually opened things up,” says Parham. “This could be a big tipping point [for the WNBA]. I wouldn’t be surprised if the Lynx and the Fever [make the finals] again in 2013.”

It’s time for our annual list of overused words that must be redacted from our language, permanently banished to never-ever-used-again land by marching them down the plank to oblivion. Like the Monkees, here they come, the 2012 Banished Words (BWs) or the Bowwows: