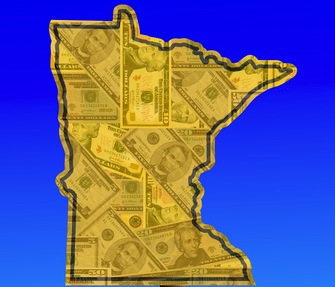 As a state, Minnesota must both invest in the future and meet our moral obligations, state demographer Tom Gillaspy told the Civic Caucus on January 28. The state needs structural reform, he argued, in order to adjust to structural deficits that persist under the present framework. Gillaspy shared insights on the state budget situation based on his three decades of government work and his perspective as an economic demographer.

Even as we work our way out of the recession, Minnesota will continue to lose its capacity to provide services at present levels. He argues that Minnesota leaders should first develop a common vision for the state’s future, a common understanding of our goals which lawmakers and the governor could then use in assessing proposed strategies for reform.

The Great Recession has caused four years of foregone revenue growth that we will not make up and the Baby Boom Generation has begun to turn 65. Retirements will soon increase sharply, long-run economic and income growth will slow, government revenue growth will slow even more, but pressures on spending, especially for health care, will increase.  The structural deficit in the budget is driven in large part by changing demographics. Year over year expenses are projected to outpace income to the state for at least the next 25 years. These are long term problems that will only get worse unless we change the way things are done.

There is spending, in general, Gillaspy said, and then there is investment. Investments are expenditures that result in increased revenue capacity over the long term. Physical infrastructure, education, research, and intellectual property development would be included in this definition.

And we have moral commitments to spend. Keeping people in long term care facilities is not an investment since there is no financial return, but it is a moral obligation that we accept. The distinction to keep in mind is that while we may rightfully choose to spend to meet our moral obligations, it is our investment outlays that will increase future economic output.

Elder care spending, both for investment and to meet moral obligations, will be costly.

It is important to understand that many aging people with productive capacity can remain active and contribute. An investment of time in organizing senior tutors for children in writing and arithmetic would have returns for the students, the elders (by keeping them active), and the community. But much spending we do for the care of the elderly will not result in future economic output.  We need to recognize that while some aging people will continue to contribute significantly, others will be more dependent upon state services and thus net consumers of state funds.

One of the most rapidly growing components of the state budget is the combined expense of long-term care, long-term care waivers, and care for the elderly. Through the long-term care waiver program we have kept people out of nursing homes by providing in-home care services, but that in-home care is still very expensive. It is a major reason why all states have structural deficit problems. Resources are not growing as fast as demands for service.  And if we cut back on investments to meet our moral obligations, then we diminish our future capacity for economic output. “It is the equivalent of eating your seed corn, ” one participant noted.  The challenge is so great that in 25 years growth in health care costs will eat up all available growth in spending statewide.

To elected officials: There are options beyond cutting and taxing

During the campaign the media focused debate on only two options, but really there are three:

2.  Raise revenues (not only by tax increases, but also with investment that produces increased revenues)

This third option received little attention, perhaps because it was confused with the simple solution of “cutting expenditures.”  In fact, most of future productivity increases will occur by both doing things better (e.g., reducing the criminal recidivism rate; increasing high school graduation rate; increasing education quality) and doing better things (promoting activities that improve health outcomes; keeping people healthy by helping them be active and productive in the community).  Increased productivity will result whenever we take advantage of opportunities to improve outcomes at a lower cost.

There is a rare 2-4 year window for structural change

Gillaspy commented that in his 32 years in government, he has not before seen such an opportune environment for change as exists in St. Paul today. “I think we have a 2-4 year window where major systemic change will be possible before the culture will return to incrementalism,” he said. “This is the first time I’ve seen this sort of confluence of events, from the economic crisis (which could have been much worse) to the structural imbalance of services to the shifting political sands.

FULL SUMMARY OF GILLASPY’S REMARKS WILL BE POSTED ON THE CIVIC CAUCUS WEBSITE. The website also has summaries of more than 200 past interviews with civic leaders.