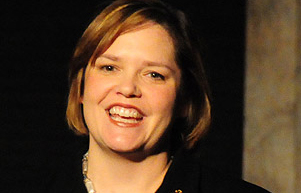 Margaret Anderson Kelliher is about to attempt a rarely tried feat: serving as Speaker of the Minnesota House of Representatives during a contentious legislative session while at the same time running for governor in a competitive DFL field.

“There are both positives and negatives to being in that position,” Long tells the Minnesota Independent. “She has more of a platform [as a candidate] than she would otherwise have, because she is the Speaker.”

On the other hand, says Long, the leadership job is “a lot of responsibility [and] a tough role.”

The main rub: “not having sufficient opportunity to contact delegates. …  If you don’t call people and ask for their vote, that’s a major impact on a candidacy.”

But Kelliher says she can reach delegates on evenings and weekends, adding that the perception of a legislature that runs overtime every night is out of date, with only three late-night sessions last year.

More than that, Kelliher applies her aim to “stay focused on what’s best for Minnesota” to both her Speaker job and her gubernatorial candidacy. “Those things are linked,” she says.

Long says Kelliher, whom she supports for governor, is conscientious enough to handle both tasks. The two have numerous ties. Long was the first woman to serve as Speaker of the Minnesota House, in 1992-93; Kelliher is the second, serving since 2007. Kelliher succeeded Long in 1999 as representative of Minneapolis’ District 60A. Long had her own competing responsibilities in 1998, her last year in office, when as chair of the House tax committee she sought (unsuccessfully) the DFL endorsement for secretary of state.

Kelliher is betting it all on her bid to replace retiring Republican Tim Pawlenty in the governor’s mansion next year, pledging not to run for re-election to her House seat and to abide by the DFL endorsement.

“She has the most to win and the most to lose,” says Schultz, who teaches law and political science at Hamline University. Kelliher’s candidacy would be boosted by legislative success, but that’s no easy trick. Schultz sees success for Kelliher as getting a bonding bill that’s bigger than Gov. Pawlenty proposed and resolving the state budget deficit without cutting education or health care further – all in good time and without a bloody battle. Gridlock, much easier to come by, hurts her chances.

A problem, in Long’s view: The DFL endorsement will come early this year – at a state party convention pushed up to April 23-25 – before the constitutional deadline to end the legislative session on May 17.

Little progress or disappointing deals at a legislature that’s still in session at convention time could look bad to delegates and take a toll on Kelliher. One way around that would be to delay tough legislative decisions until after the convention – “a risky scenario,” says Schultz, “but then all scenarios are risky for her.” Indeed, he says, state GOP leaders could be the ones to profit from delay, following their national-party leaders’ example.

Kelliher offered no guess as to whether the session might end earlier than May 17, but pointed out that DFLers intend to get the session off to an early start with action on jobs and the economy. The start of the session is another busy time: Precinct caucuses are set for Feb. 2, while the state legislature convenes Feb. 4. Kelliher says her campaign has been focused on preparing for the caucuses from the start and she expects to do well.

So she’ll be able to do an adequate job as both Speaker and gubernatorial candidate? Better than that – she says she plans on “excelling at both.”

There are other candidates whose day jobs complicate life on the campaign trail – Kelliher names Minneapolis Mayor R.T. Rybak, a DFL rival, for one – but being House Speaker is a special, high-profile position, says Schultz, with the benefits and burdens of being seen as the leader of the legislature, a symbol of its successes or failures.

Speakers haven’t often run for governor, but other legislative leaders have (not including GOP state Rep. Marty Seifert, who stepped down as minority leader last year for his guv run). “It’s been done,” says Tim Penny, a 2002 Independence Party gubernatorial hopeful, recalling that two of his opponents, Pawlenty and DFLer Roger Moe, were at the time majority leaders in the state House and Senate, respectively.

But in Penny’s judgement, his opponents in that race let politics take precedence over governing. “They didn’t work with [IP Gov. Jesse] Ventura to solve the state’s budget problems, he says: “Minnesota’s needs were not met because their political ambitions overruled them.”

Kelliher is confident she can work with Pawlenty, saying they’ve always had a “fine working relationship [though they] differ drastically on the direction of the state.” Long concurs: “She isn’t necessarily out there swinging at him.”

Will Kelliher pull her punches on Pawlenty’s frequent out-of-state travel in the service of a prospective presidential bid, considering she’s running for higher office too? The state boundaries make all the difference, Kelliher says – Pawlenty’s national ambitions aren’t going to take him for a simple trip “down to a cafe in St. Peter,” as her gubernatorial ambitions might.

A speaker running for governor, says Schultz, could decide to shine as a leader in front of cameras at the expense of necessary backstage negotiating. But that seems likely hazard for her, as Schultz sees, than the simple problem of limited time on her part, with the result that “something gives way, even if inadvertent.”