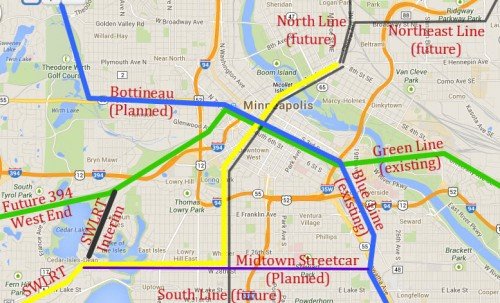 It’s clear that nothing is clear when it comes to figuring out how freight rail, bike trails, neighborhoods, and our Chain of Lakes can exist in harmony with the planned Southwest Light Rail line. This doesn’t come as a surprise to anyone who has remotely followed the development of this line over the past decade.

As the planning process has gone on, it appears we have two sides retreating further to opposite positions:

The public consensus seems to be that nodes like Uptown, Lyn Lake, and Eat Street deserve connectivity to our regional transit network, especially with such a high public investment at stake. It does, after all, seem ridiculous to consider hundreds of millions of dollars for features like a risky shallow tunnel through Kenilworth and viaducts/tunnels to suburban parking lots / unwalkable offices in Minnetonka and Eden Prairie, but not reconsider connecting regional destinations and dense housing nodes to high quality transit.

Planners and officials, on the other hand, have doubled down on a route that was chosen under changed cost-effectiveness guidelines to move suburban commuters and congestion-causers faster and farther at the expense of urban transit users. As Peter Wagenius astutely noted, “There are folks who are extraordinarily invested in validating the process that has brought us to this point.” The reality is this is a regressive plan, but it appears we’re stuck with it.

The political reality remains that Southwest LRT’s path is hung up by two intractable positions. Without canceling the project and starting over, where do we go from here? Here’s a comprehensive look at how we can make decisions now that set ourselves up for quality transit in the long term.

If we’re going to build light rail in the Kenilworth Corridor, there are a few steps we can take to triage the plan and make it healthier from the start with a better chance for improvements in the long run.

By triaging Southwest LRT and allowing it to be built now, we will have greater flexibility for transit network improvements in the future. This part of the plan is how we take a flawed Southwest LRT concept and build upon it for decades of transit excellence.

Those who decided on the Kenilworth alignment over the Uptown alignment think buses are good enough. They’re not. Someday, when we invest in transit to connect neighborhoods rather than park and rides, we will benefit from taking small steps now to use forwards-compatible.

The planned Green Line to Penn can be repurposed in the future to connect to St. Louis Park’s West End via BNSF right of way, and potentially other job centers further west along 394. This would connect a corridor with nearly as many jobs as the proposed Southwest corridor. Not to mention that the 394 corridor actually has higher job density and more walkability than many of the job nodes along the Southwest portion.

What would be done with the Southwest line we’re planning to build now? At some point the primary east-west spine along 5th Street downtown will be at capacity with four lines operating as two services (Blue and Green). But I sure hope we see a future with more than four LRT lines connecting the region.

At that point, we’ll have to get serious about a second spine for LRT service. Nicollet Ave is an obvious choice, especially the segment currently under consideration for our starter streetcar. If business impacts on Nicollet south of Franklin are a concern, a cut-and-cover tunnel under Blaisdell may be more appropriate. Because of #3 and #4 above, we’ll be ready to tie in from the Greenway to the Nicollet corridor to head downtown. And this grade transition would conveniently happen at the site of the infamous Kmart which is on borrowed time. Think of it as 3C by retrofit.

When this is done, we can still accommodate rail service running the entire length of the Midtown corridor from West Lake on the Green Line to Midtown on the Blue Line. Furthermore, we’d have even greater flexibility to extend Midtown service on the west due to #4. Finally, the 3C retrofit would share urban right of way with other services we may want in the future, such as a line up Central Ave to Fridley, or a diagonal to Rosedale, or a line south to Richfield or Southdale.

In this scenario, what would happen to the planned single track Kenilworth alignment between West Lake and Penn (#1 and #2)? It would actually still provide quite a bit of value. It would connect multiple future rail lines that would cross downtown at 5th and Nicollet, allowing them to share vehicles and facilities. This was actually one of the primary marks against 3C in the LPA process, besides trouble interlining with the Green Line. The Kenilworth single-track segment would solve this gap, outside of downtown. Secondly, it would offer flexibility to provide peak-hour express services from Eden Prairie, which was also another knock against 3C back in 2009.

What would Minneapolis get out of this? Options. When we come to our senses, we can build quality transit to Uptown, without risking FTA New Starts funds or the planning process thus far. We’d also have mitigation. As noted, a single track would likely require less destruction of the tree canopy in Kenilworth. It would be easier to keep the bicycle path in the same corridor. And, down the road when we do decide to put transit where it makes sense, Kenilworth neighbors would only have to deal with a dozen or two passenger trains a day rather than hundreds.

To paraphrase Voltaire, we can’t let the perfect be the enemy of the good. Yet, at the same time, we can’t let the immediate be the enemy of the future. Southwest LRT is being pushed forward through Kenilworth, and there aren’t easy answers. But, with a few simple changes, we can make sure our choices now provide the best outcomes decades from now when we have an even more progressive vision for mobility in our region.