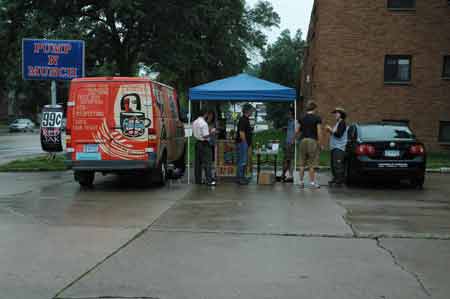 Patrons celebrate 'Go Biodiesel Day' at the Pump 'n' Munch at 63rd and Lyndale in Minneapolis.

Never turn down a free cup of coffee. You might learn something. For example, did you know that oil and coffee are the world’s two most valuable commodities? And that the U.S. is the largest consumer of both? One brown-murky substance provides fuel for the body, and the other brown liquid provides fuel for the automobile. And so it isn’t an extraordinary pairing to find the two at a fueling station. But during a recent promotional event dubbed “Go Biodiesel Day” an alternative to the common blends were available at the Pump N’ Munch on 63rd and Lyndale Avenue South in Minneapolis.

Biodiesel Blue, a biodiesel distribution company with offices in south Minneapolis, provides the Pump N’ Munch station with a localized version of diesel fuel made from soybeans. “They’re going through about 600 gallons per day,” said Emily Whebbe, a spokesperson for the distributor. “Our goal is to push it to 1,000 gallons per day.” Whebbe said the station was selling only about 200 gallons of premium gasoline per day, so when Biodiesel Blue approached them with their product, they accepted, becoming the first station in the metro area to offer the fuel.

“Peace Coffee”:http://www.peacecoffee.com was on hand for the event as well, handing out free cups of coffee and conversation centered around a shared theme: That money spent on fuel, and coffee, might be better spent supporting sustainable and often local business. So it was fitting that the vehicle Peace Coffee drove to the event was a coffee delivery van powered by biodiesel from Biodiesel Blue. It ‘s no surprise that both companies tout the benefits of small farming operations as the source for their products.

As a Minneapolis based company that purchases coffee from small farmer cooperatives throughout the world, Peace Coffee is guided by fair trade principles. For Peace Coffee, fair trade means that coffee growers must be organized into democratically run coops, which agree to independent inspections and use sustainable methods of agriculture. In return, Peace Coffee offers the farmers a living wage, often higher than world market values. In an age where just four major conglomerates control 40 percent of the global coffee trade, Peace Coffee offers a personal touch.

As a founding member of a coffee buying coop called Cooperative Coffees, Peace Coffee works with other coffee purchasers, practicing what they preach. “Together we pool our money and buy directly from farmers in various countries,” said Andy Lambert, Outreach Coordinator for Peace Coffee. “As the broker and the buyer, we can bypass the middlemen. We’re able to pass that money on to the grower–we actually go to the country and write the contracts with these farmers,” continued Lambert.

It hasn’t escaped Biodiesel Blue that only a few corporations control much of the world oil supply as well. So they hit upon the idea to use renewable crops such as soybeans, of which, they note, the U.S. is the largest producer. The idea isn’t as novel as one might assume. The Diesel engine’s inventor, Rudolph Diesel, originally built his engine in the late 1890s to run on peanut oil. He hoped that it would provide a way for smaller industries, farmers, and “commonfolk” to compete with the monopolizing industries, which controlled most energy production at that time.

So in a way, Biodiesel Blue has gone back to the basics. Much of their product sold here is grown in Minnesota. By comparison, U.S. petroleum based oil imports have increased to record levels during the last 25 years, providing about 50 percent of U.S. consumption. And in an age where the beneficiaries of oil dollars are often dubious at best, and when dependence on foreign oil is economically shaky, Biodiesel Blue may offer peace of mind, if not the benefit of a cleaner-burning diesel.

B100, a nearly pure biodiesel blend, is what’s on tap at the Pump N’ Munch during the warmer months. In the winter, the company switches to a 20 percent biodiesel to petroleum diesel called B20, because biodiesel’s stubborn cold-flow properties cause it to gel at about 40 degrees. Otherwise, the company insists, the fuel will run in most diesel engines without modification, though if you have an older vehicle, they recommend consulting a mechanic as biodiesel can deteriorate natural rubber.

That aside, biodiesel results in a significant reduction over regular diesel in many greenhouse gas emissions. In addition, diesel fuel has more energy per gallon than regular fuel, allowing a similarly equipped vehicle to get far greater gas mileage per gallon (many small diesel vehicles get better than 40 miles to the gallon). Nevertheless, regular gas is generally the cleaner burning fuel and Biodiesel Blue makes no bones about it. “As long as you have a diesel engine, why not?” asks Webbe. “This is today. It makes sense now.”

Indeed, a diesel automobile engine can run on either regular diesel or biodiesel like the kind sold from the Pump N’ Munch. And the human body can drink Peace Coffee as well as any alternatively produced coffee. So it’s not really a question of body, so much as one of the mind.

And that was the overarching purpose of the event; to educate local residents about choices, over a stimulating cup of coffee. Further information, including community socials and classes about renewable energy, is available through Sundays Energy: an umbrella company for biodisel and other forms of alternative energy with offices in South Minneapolis. Visit “sundaysenergy.com”:http://www.sundaysenergy.com or “biodieselblue.com”:http://www.sundaysenergy.com for information on these and other upcoming events.