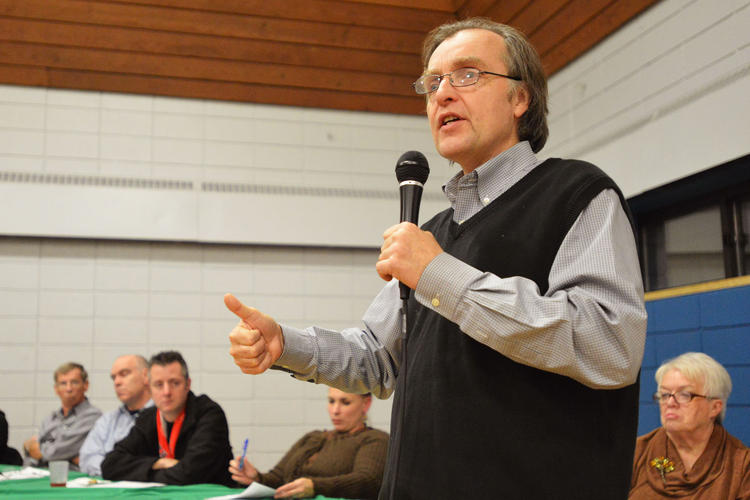 Minneapolis City Councilman Cam Gordon speaks to the board and neighborhood residents about the need for energy reform in the community during the Southeast Como Improvement Association meeting in Van Cleve Park on Tuesday. (By Emily Dunker)

Though the Southeast Como Improvement Association approved budget changes intended to alleviate its financial burdens at its meeting Tuesday, its future is still uncertain.

SECIA has recently experienced a 75 percent budget cut, according to its most recent newsletter.

Neighborhood coordinator Ricardo McCurley said unless the group finds a way to increase its funding stream within the next eight months, it will be forced to reduce staff and will ultimately lose its ability to afford office space by 2014.

SECIA serves the neighborhood about one mile northeast of the University of Minnesota campus, where more than 40 percent of the neighborhood is student-aged, according to a University report. It currently employs three full-time staff members responsible for organizing community-building programming including cookouts, beautifying efforts and environmental advocacy.

Many of the association’s financial difficulties stem from a recent change in the way Minneapolis funds neighborhood efforts. In 2011, the city discontinued its Neighborhood Revitalization Program, which allocated funds from property taxes to neighborhood projects.

When the 20-year program ended, the city’s Neighborhood and Community Relations Department absorbed its responsibilities, along with $10 million in leftover funds.

Justin Eibenholzl, SECIA’s environmental coordinator, said SECIA used these NRP funds to pay staff who were the driving force behind its programming.

“Basically, students will have fewer people and fewer resources to rely on than they had in the past,” he said, “especially for the ones who have chosen to make Como their home specifically because of the cool and interesting programs that are going on here.”

Why SECIA matters for University Students

Christina Perfetti, a former University student, said one of SECIA’s past environmental efforts — Move-in/Move-out —, was a great example of the way the organization improved student life.

During fall and spring moving cycles, students could exchange leftover curbside waste to make moving more efficient and ecological. In 2011, the program was a finalist for a Minnesota Environmental Initiative Environmental Achievement award.

Perfetti, who now works in University Student and Community Relations, said she felt that MIMO both resonated with environmental beliefs and served as a networking tool to meet her student neighbors.

Despite the program’s success, SECIA didn’t have the funds to continue the program this year.

Eibenholzl worries that more beneficial student programming will be lost without full-time staff. He said SECIA provided internships and volunteer hours to 174 different students last year. These opportunities could vanish along with MIMO.

Despite NRP’s dissolution, other neighborhoods in the University District seem to be relatively unaffected.

Dick Poppele, former president of Prospect Park East River Road Improvement Association, said the organization only had one part-time staff member when NRP was shut down, so it was minimally affected by the change.

Eibenholzl said SECIA will continue to seek grants and donations of all sizes, adding that otherwise it will become a very different organization.

“As the funding disappears, SECIA will look more like organizations that do not have program staff,” he said. “The struggle is to figure out how to maintain programs that students have come to rely on, without any money.”

Marie Fischer, who also works in University Student and Community Relations, said she has had positive experiences working with SECIA and found its effort to continue on inspirational.

“They are not cowering in fear after big cuts,” she said. “They’re still out there getting it done.”