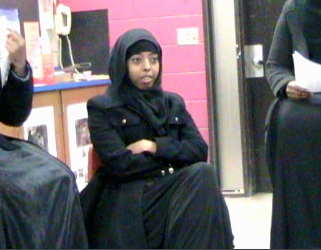 Sara Osman sometimes finds herself with “one foot in the past and one step in the future,” as a second generation Somali American. A senior at South High in Minneapolis, Osman was born and raised in Minneapolis, and has never been to Somalia, though she can speak the language. As a member of s.t.a.r.t., an anti-racism group at her school, Osman is one of a group of student leaders who have taken issues of race head on, especially in the last month after a large fight highlighted the need for students to talk about race.

Osman’s parents are both Somali, and she has eight younger brothers and sisters. “My parents are still stuck on the mentality of going back to the homeland,” she said. “A lot of Somali parents don’t want this to be a permanent thing. It’s hard for them to understand that we have to make a place here. We have to get jobs, become integrated.”

Osman says her parents don’t understand the system, and often people of her generation have to be the link between parents and teachers. It’s often more difficult for boys. “Somali boys especially are having problems and having trouble in school,” she said.

Somali girls often are the ones in charge of the household, according to Osman. “Boys are supposed to protect us. Females are more understanding of the circumstance. In Somali culture, our boys aren’t given enough opportunity. They’re trying to find themselves more than girls are.” In American culture, “Somali boys have a harder time adapting. Their role models are basketball players or rappers. Their mindset is more focused on financial problems. I don’t think they understand the value of education.”

When Osman was younger, she had more responsibilities around the house. Now that her younger brothers and sisters are growing up, she shares the load more equally, though still she has plenty to do, such as acting as a chaperone for her sisters.

The racism at her school includes things like jokes and comments, but is often hidden, she said. For example, one day the Somali students found that one their lunch tables were removed. “Somali students tend to sit together on one side of the lunch room,” she said. When they asked someone why the table was taken away, they were told “we didn’t know how to clean up after ourselves,” she said.

Another thing that irks Osman is how so many people don’t know the geography. Somalis are often referred to as “malis” on social media. Such as “Ew, Malis,” etc

“It’s really confusing even for Somali students,” she said. “Schools don’t respect your culture- not the administration, but the students themselves. And the curriculum at South and across the district is not focused on what’s going on in the world. We don’t talk about what’s happening. We don’t know about each other. We don’t know about where we come from. It wouldn’t be such a scary thing to come to school, but people don’t know where you come from. That’s what builds the tension.”

After the fight last month, s.t.a.r.t. stepped up and began dialogues with the students about what happened, and how the school can ease racial tensions. The group held a spagetti dinner and initiated a “mix it up” day, which they had done earlier in the year, where people were encouraged to sit by someone of another race, or that they didn’t know.

“As leaders of s.t.a.r.t., you can only hope for the best,” she said of the group’s efforts. The dinner they hosted “turned out better than we could have possibly imagined,” she said.

Osman believes South needs more conversations and dialogue focused on race. “A lot of us seniors are leaving in a couple of months,” she said. “We want to pass it down. S.t.a.r.t. is willing to help students find ways to engage their school and community, with a focus on racial awareness.

As for herself, she’s not exactly sure where she’ll end up next year. She has applied to a number of colleges, but is also considering joining the Peace Corps, or possibly taking a break before continuing her studies.