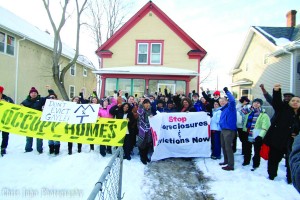 After a public pressure campaign led by Occupy Homes MN ’s Foreclosure and Eviction Free Zone, Gayle Lindsey, a nursing assistant and grandmother in South Minneapolis who was facing imminent eviction, has won an 11th-hour loan modification on her mortgage from M&T Bank. Lindsey bought the home in 2001 and was given an adjustable-rate loan that rose by a few hundred dollars last year.

“I was struggling, but I still paid, it,” she said. But, last year, hours on her second job were cut from 30 per week to only five, and she found that she was unable to afford her monthly payments.

Early last year, she said, M&T Bank, based in Buffalo, New York, sent a letter threatening foreclosure. More letters, these from the bank’s lawyers, followed. She began seeing a credit counselor, hoping to get a loan modification, but she couldn’t find the paperwork the bank wanted.

“I never talked with anyone at the bank,” she said. M&T Bank eventually foreclosed on Lindsey and sold her house. The loan adjustment came during the redemption period, the time banks allot for the homeowner to repurchase the home. 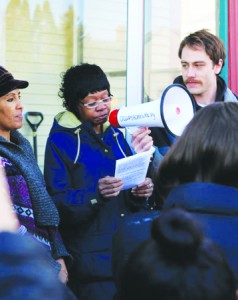 Lindsey would have been forced to leave her home had not Occupy Homes MN organized her neighbors and others to insist that Lindsey be given a modification. She and activists also sought principal reduction because she, like many other homeowners in the area, owed more than what the house was worth.

Lindsey’s victory marks the seventh for Occupy Homes MN. It also marks the first victory in what Occupy Homes has labeled the Foreclosure and Eviction Free Zone, a project that brings neighbors in the Central and Powderhorn neighborhoods together to refuse to leave their homes without a fair negotiation.

Lindsey, whose renegotiation came a month after her redemption period ended, is the first victory in “the Zone.” Neighbors and Occupy Homes MN organized a series of rallies, community potlucks, and press appearances, denouncing the efforts by M&T Bank to put Lindsey out of her home. There was even a call-in campaign that targeted the president of M&T Bank.

Earlier this week, while sitting at her kitchen table, Lindsey got a call from an executive at M&T Bank who offered to write her a new affordable mortgage.

“It shows what can happen when people stand up for themselves and when they stand together for one another,” said Lindsey. “I want to move on to more victories for the community.”

Mel Reeves is an activist working with Occupy Homes MN. He welcomes reader responses to mreeves@spokesman-recorder.com.