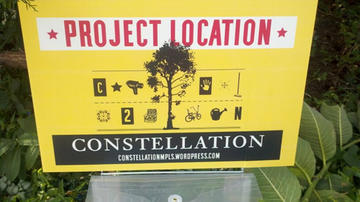 Art has never felt more community-focused (nor a community more art-focused) than being invited into the backyards and living rooms of South Minneapolis. That’s what we got to experience last weekend through the South Minneapolis Constellation event and a CakeIn15 living room concert by Communist Daughter.

According to their brochure…

Constellation highlights the integral role that art and cultural production play in our daily lives, neighborhoods and communities by opening up domestic spaces in the South Minneapolis neighborhoods of Powderhorn, Corcoran, Longfellow and Seward for public cultural events.

The event last weekend included about a dozen art events throughout the neighborhoods. We attended five. I was amazed with how comfortably intimate the events were. Intimate and art in the same sentence can be a little intimidating—but in each installation we visited the hosts were friendly, but not imposing. If all you wanted to do was check it out from afar, that was cool. But if you had the time and inclination to stop and get involved and ask questions, they were also very happy to talk about their art, the neighborhood and their inspiration.

We started with a stop and Ekphrastic and Fantastic, where we knew the hosts, Lynette Reini-Grandell and Venus DeMars. We learned that Ekphrastic writing is prose or poetry inspired by visual art. So we wrote a poem based on the art we saw. We spoke with some great people; we heard some fun music. The mood was easy, breezy and very neighborly – even if we weren’t from South Minneapolis.

Next stop was the free graffiti wall at 3218 Bloomington Ave. Aine (age 8) loved the idea of being able to do a little graffiti and tag her art—but I was really drawn in by the host who gave us a tour of the “real art” which had been constructed as a graffiti abatement. Apparently the area had been a hotbed for gang graffiti so the local artists got together, using the daguerreotype style (image is a direct positive made in the camera on a silvered copper plate), produced some gorgeous landscapes more reminiscent of a lakefront Up North than an urban horizon.  The paintings glimmer throughout the day based on the location of the sun and the work has stood the test of time with no visible signs of vandalism. (Although there is a clear “No Trespassing” sign, which may also help.) 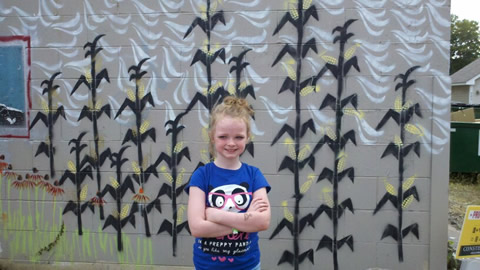 The host for the graffiti wall drew us into our next stop, the Backyard Acupuncture Project, sponsored by Southpoint Community Acupuncture. While an advocate of acupuncture, I knew very little about community acupuncture, where folks are in a shared space getting needled. My husband and daughter got a chance to try out acupuncture. The woman working with Aine, was so friendly and inviting. Aine was not immediately jumping up for the chance, but eventually got into the groove, suggesting new places on her arm that could use some work and agreeing to a needle in the head. It was a wonderful introduction to community acupuncture for all of us.

Our next stop was the Corner of Good Fortune, where local artists and neighbors Julie Helen Rice and April Erickson had set up an amazing Shinto inspired art installation. The idea was to invite visitors to personalize paper “Ema.” These traditionally are wooden plaques that Shinto worshippers write prayers or wishes on and hang at the shrine where kami spirits or gods receive them. Visually it was fun to see the rows of wishes blowing in the wind. And it was fun to create our own Ema. One challenge for the artists is where to post the Ema after the event. They were looking for a permanent home. No one wants to toss out someone else’s Ema! 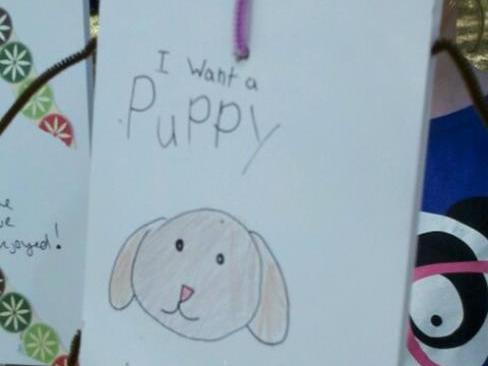 Our final stop on the art tour was the Phillips West Sign Shop with artist Peter Haakon Thompson. Visitors were invited to make a wooden street sign with their name much like the cabin name signs found in Northern Minnesota. Each guests was invited to create two signs: one to take home and one to be hung up around the neighborhood. I loved the idea of name signs in the neighborhood as an opportunity to build community and again, they were happy to invite us to join, although we hail from East of the River.

The weekend was capped off by a living room concert hosted by the Cake Shop, performed by Johnny Solomon and Molly Moore of Communist Daughter. The set up was like a kid’s piano recital with chairs lined up—and a super bonus—cupcakes for everyone. The intimacy of the weekend’s experience continued with song introductions and joking and very appreciative musicians and audience members.

The concert was a sendoff of sorts for the band, which took off later in the week for a long tour. It was great to get a chance to hear Molly Moore’s voice more than you can when the full band is playing. She has a beautiful voice reminiscent, I think, of the Cranberries’ Dolores O’Riordan. Also it was great to hear the story behind the songs from Johnny Solomon—especially Fortunate Son, written about the son chosen to stay home to mind the family farm while his brother was drafted to go to war, a war from which he didn’t return.

It was a unique experience, almost reverent, with 25-30 attendees. I realized seeing the full band play in Mears Park later in the week that while I may prefer the loudness of full band (so I can sing and hum along) and room to dance, I also felt that having had the insider’s experience made me appreciate the work even more.

For someone who spends most of her life online, the weekend in its entirety was a wonderful immersion into other peoples’ lives and art. It is something I would love to do more often. 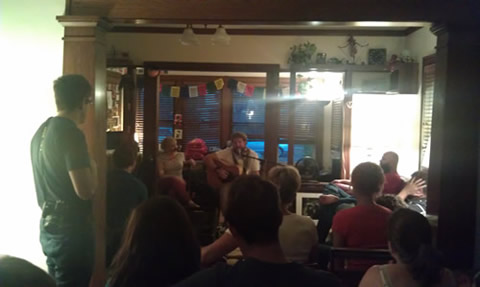