South High students are taking a stand against Arizona’s controversial statute 15-112 by staging various actions that call attention to the ban on ethnic studies that was enacted at the beginning of this year. In what social studies teacher Rob Panning-Miller called one of the most meaningful learning experiences students have had this year.

Arizona’s Statute 15-112 forbids schools to include courses that: “1. Promote the overthrow of the United States government, 2. Promote resentment toward a race or class of people, and 3. Are designed primarily for pupils of a particular ethnic group.”

South students kicked off the campaign last Friday, when students in small groups went to classes and told teachers they were authorized to mark any posters that violated the 15-112 statute (as if it were in place in Minnesota) and placed a sticker on those posters that read: “Must be removed: in violation of statute 15:112.” 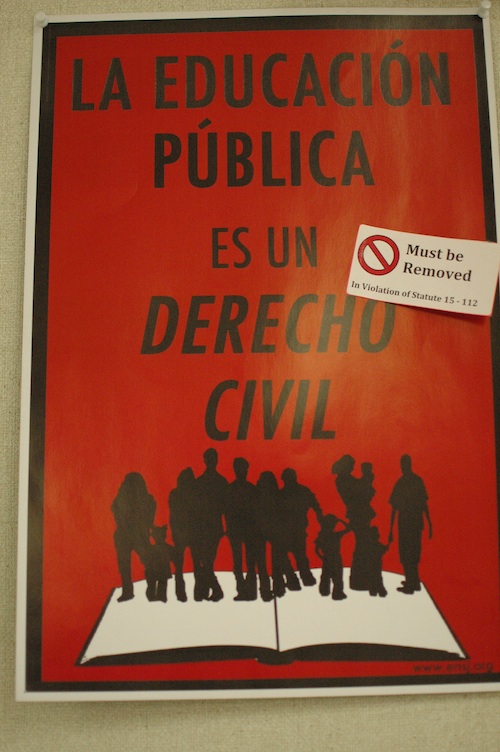 Rob Panning-Miller, a world history teacher at South, said the initiative came out of a conversation he had with some other teachers at South as well as at Central High School, in St. Paul, which led a “read-in” last week. Panning-Miller brought the idea up with a couple of student groups- The Human Rights Group, and Unidos, and the students and teacher planned the week of actions.

Panning-Miller said there are about 20 kids involved in the actions. Last Friday, they started by doing a simulation of banning material, where they made stickers that said various posters around the school needed to be removed. They also went to classrooms and took books out, such as The Tempest, which was being read by an English class. That is “effectively what they did in Tuscon,” Panning-Miller said.

On Tuesday, the students then went during their lunch hour and removed the stickers, replacing them with new stickers that said “No History is illegal.” They also passed out fliers with information about the new law in Arizona.

On Thursday, the students will hold a “read-in” in the media center, where they will read aloud banned books all day.

South has various places in its curriculum that cultivates learning about different cultures. Panning-Miller used to teach a Latin American studies class, although now his whole day is taken up with World History classes. Latin American and Chicano Studies are sometimes incorporated in various English classes at South, he said, and there is also a high level Spanish class that teaches cultural elements. In A.P. History classes, the teachers do a good job diversifying the curriculum, Panning-Miller said, including teaching books such as Howard Zinn’s A People’s History of the United States and Ronald Takaki’s A Different Mirror, both banned books in Arizona.

Jonathan Moreno, a senior and president of Unidos, was busy on Tuesday with the project. “We just wanted to spread the word about what is going on in Arizona,” he said, “in case something happens here.” Moreno believes Arizona’s new law is wrong because “it’s taking away from someone’s culture, someone’s history,” he said.

Moreno thinks the law is “silly.” Instead, people should learn to respect each other, be informed and accept different cultures.