311 and MnDot have been informed of the broken sound wall, above.

Residents in the southeastern section of Hawthorne have brought up areas of concern along the 2200 block of 4th St N. Sometimes, as shown above with the retaining wall, those problems spill over to 3rd St — or even, technically, several feet beyond. 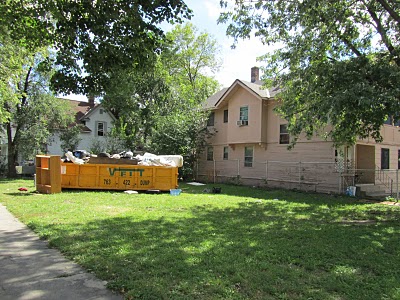 This dumpster has been left on 2228 4th St N, vacant land owned by Hennepin County.

Drug dealing, dog fighting, and other illicit activities have been reported along this block, with a notable drug arrest reported by a neighbor at 2210 4th St N. This property is owned by Mohammed Moghul, presumably a relative of Bashir Moghul. Mohammed uses a contact address in Roseville that Bashir and other Moghul relatives have used in the past. And the place is at least $8,100 behind on taxes.

In the picture above, the vacant lot brought back some fond memories. Once again, someone is misusing Hennepin County land. I called this in to 311, Hennepin County Property Services, Commissioner Stenglein’s office, and even Veit Disposal. We’ll see which one alleviates this nuisance first.

The other incidents described by residents were not occurring during my visit to the area, but the information has been passed on to our councilperson and the 4th Precinct. We watch, we call.