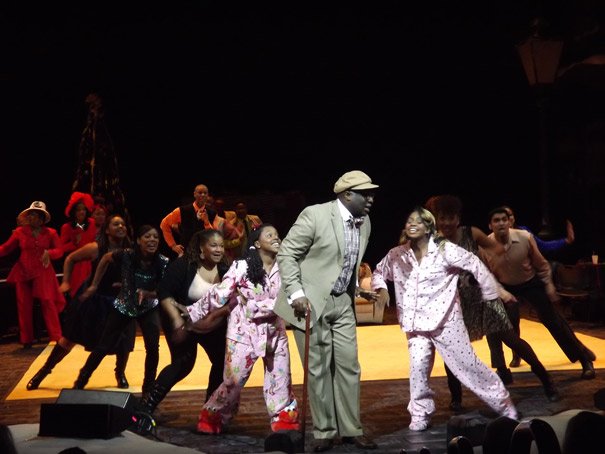 For nearly 43 years the three-time Grammy award-winning musical ensemble, Sounds of Blackness, has been a fixture of the “Minneapolis Sound.”

And though the players and voices have changed, the essence and soul of Sounds has remained solid. Much of that could be because many of the new voices have connections to the past, as Sounds has birthed three generations of singers and musicians.

The latest incarnation of Sounds of Blackness took to the stage at the Guthrie Theater this past Monday (Dec. 9) for its 35th year of the annual production of “The Night Before Christmas – A Musical Fantasy.” And like the group itself, though the story remains the same, each year the Sounds’ take on the classic poem gets a newer, hipper update. 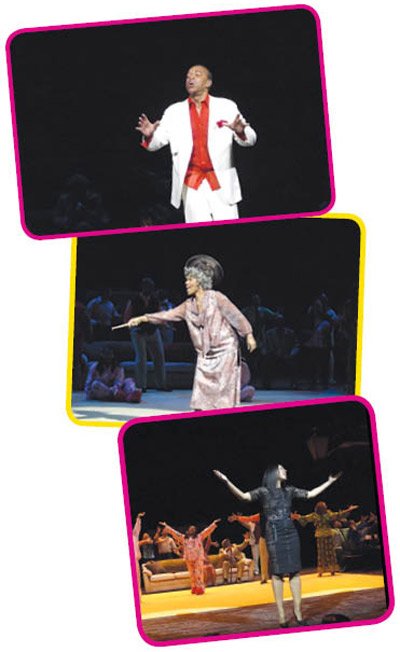 Right: (Top to bottom) 1. Gregory Sears, narrator of Sounds ofBlackness’ “The Night Before Christmas.” 2. Chreese Jones singing “Born in a Manger.” 3. “Arms of joy” Carrie Harrington (foreground) leads in the Sounds’ rendition of “The Joy of Christmas.”

For the past four years I’ve been attending the annual holiday production, this year presented by Sue McLean and Associates (McLean passed away earlier this year, but the company continues to produce a multitude of events), and each year I’m delighted by not only the singing, but by the update the tale gets. Though the backbone of the production remains the same, each year the musical numbers and the dialogue are tweaked to reflect songs and sayings current in popular culture. References such as “Yolo” and “Ain’t nobody got time for that” and plays on the differences of culture provide for humorous and sometimes uproarious moments throughout the performance. This year’s most memorable comical moment came when Santa, played by David Hurst, explained that indeed Santa is Black.

“That man right there in row 4, he’s white,” said Hurst. “You, sir (pointing to another audience member), you’re white. The president is …”

And with that line and pause, the capacity crowd in the theater broke into hysterical laughter and applause.

“That’s right, the president is a Black man,” said Hurst, to even louder laughter and applause. “Well the president used to be white.”

It’s no wonder that the theater nearly sells out each year for this show. While the updated humor is a welcomed delight, the true star of this show; and the reason the play has been able to run for 35 consecutive years, is the singing. The voices that have come through the Sounds of Blackness continue to be some of the greatest in the region. The tones that come from each member makes one wonder how Sounds is not still as revered as it was in the late 1980s and early 1990s. And with stars such as Jamecia Bennett and Paris Bennett – second and third generation members of Sounds (the two are daughter and granddaughter of the great Ann Nesby), Sounds is poised to reclaim its thrown as the premiere ensemble in soul/gospel/jazz. Jamecia Bennett also served as the play’s director. And though Paris Bennett is in her 20s, she plays the most convincing 8-year-old ever. One would easily believe she was a kid, but her fully developed vocal talent is a dead giveaway that the younger Bennett is one, of the Nesby lineage and two, that she is in no way a child.

A special acknowledgement needs to go to founding member of Sounds of Blackness, Gary Hines, who wrote and produced “The Night Before Christmas.” Hines has been an active member of the group since its inception in 1971. Another acknowledgement goes to Gregory Sears, who with his deep, baritone voice served as the play’s narrator.

Typically, the play runs one time during December, but a second showing has been added for Saturday, Dec. 21 at 3 p.m. at Sabathani, 310 E. 38th St., Minneapolis. Tickets are $30 for adults and $15 for kids. Visit the Sounds web page at www.soundsofblackness.com for more information. Trust, the seconds showing is a welcomed encore.