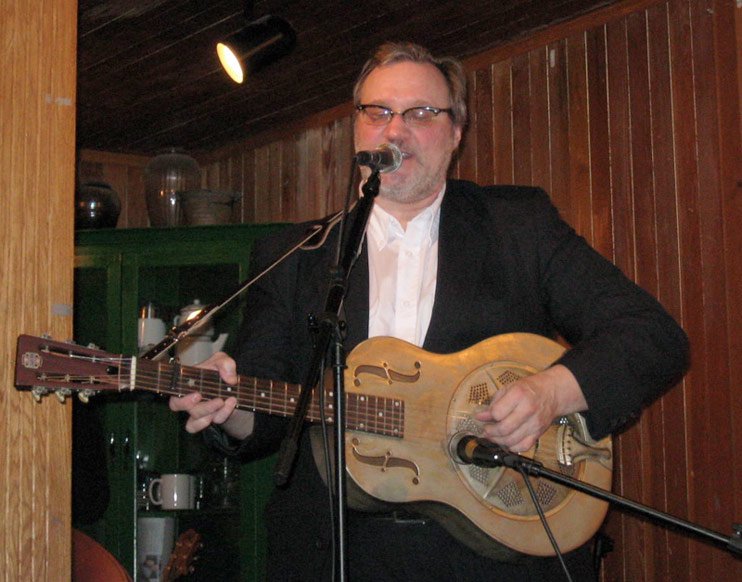 You need get only a few bars into and a couple verses into veteran singer-songwriter David Hanners‘ newest, There Are No Secrets In This Town, to recognize sure-handed craftsmanship.

He told the Twin Cities Daily Planet a few years back, “My songs are fairly simple stories. Some are big and have a moral, while some are small and what you hear is what you get. A critic in Duluth who reviewed The Traveler’s Burden … wrote that the songs were ones that pretty much anybody could have written.” An enviable talent that, indeed, is an artfully effective strength. There’s a world of difference between being unremarkably pedestrian and being deftly down to earth. The guy writing for the Duluth paper, though, didn’t get it.

An off-the-cuff explanation of genius might be doing something anyone could’ve done. Except, they didn’t and you did.

“He said that”, Hanners continued, “like it was a bad thing. He didn’t get that that was kind of the point. We’re all storytellers. It is a tradition as old as humanity itself.” And David Hanners is pretty damned good at preserving said tradition.

This is his third outing, following Nothingtown and The Traveler’s Burden, and his subtle skill at tailoring a sweetly engaging song remains solidly intact. The fact that he’s opened for legendary balladeer Tom Paxton should tell you something about his qualifications. However, you could say he has something of a pedigree.

“most of his life…working…as a newspaper reporter. It is a job where he gets to see the best and worst of people.” For good measure, “[he] grew up in Casey, a town of 2,900 in East Central Illinois. It is a farming community…an area with a history of literature and music. A few miles to the east, James Jones wrote ‘From Here to Eternity’, and a few miles to the south is the hometown of folk legend Burl Ives.”

The music, for which lead cut “There Are No Secrets In This Town” sets the tone, has a nice, easy touch to it that’d be a perfect antidote for coming home from a harried day. It’s good for the nerves, opening with a simply chorded, rustic, laidback feel to it that the Duluth reporter might say anyone could play. Except “anyone” didn’t, Hanners did. And everyone ought to be able to relate when he matter-of-factly intones,

“There are no secrets in this town.
Lies fly before the truth gets off the ground.”

From there, all just plain, old fashioned good listening. A disappointment is that you don’t get a lyric sheet with the album to sit and read along when you feel like it. Even at that, it’s a small thing. Hell, for that matter, Hanners sings clearly enough — for the most part, anyway — so you don’t miss out on the words. Bottom line, There Are No Secrets In This Town is the kind of recording they don’t make anymore. But sure should.