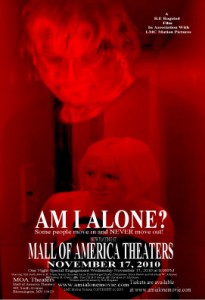 Local Lao American film producer Sonny Syonesa will have his feature film, “Am I Alone?” (www.amialonemovie.com) screened at the Mall of America Theaters on November 17, 8:00 p.m., with a cast and crew red carpet arrival at 7:00 p.m. in front of the theater at the P5 landing. Tickets are $10.

Syonesa said the initial screening for family and friends of the cast and crew sold out a Lagoon Cinema screening earlier this year. This will be the first public screening.

The film was shot entirely in Minneapolis, with some scenes taking place in St. Louis Park and Plymouth, and in a warehouse for the indoor sets to recreate a police precinct, a detective’s office, and a principle’s office.

“I love Minnesota and I think it’s the best place to film,” he said. “The Minnesota Film Board was helpful with answering questions and guidelines, and with direct support.”

Much of the film takes place in an older Minneapolis duplex built before 1900 in a quiet neighborhood. Syonesa said it helped that the home had some history and that the sounds are very natural and it was really a creepy place. That was enough to get the cast and crew in the spirit of a horror film.

“This is more realistic horror,” said Syonesa. “Its just two-percent special effects. We wanted it to be real. The suspense is more important.”

The film centers on Jill and Allen Stevens, played by Kat Surth and Korean American actor Dustin Donaldson, a young couple that relocated to Minneapolis for a new job. They find a cozy duplex and want to start a new chapter in their lives.

Just as they begin to settle in, a series of frightening events bring Jill to the brink of madness. Friends begin to question whether Jill is actually experiencing what she claims as they only seem to occur when she is alone.

Wanting to prove she is right, Jill eventually calls in the police – and a rookie detective (played by Syonesa) takes an interest in helping her. The film is full of twists and turns that keep the audience guessing whether Jill’s claims are true or the work of her imagination.

The detective is also after a killer, John Kincaid, who he said killed his partner and parents and has escaped justice for decades.

Syonesa has acted in several Lao films overseas and is currently wrapping up the project of his life, “In3Dragon” (www.in3dragon.com), filmed over several years in Minnesota, California, Las Vegas, Vientiane, Laos, and even on the grounds of a Buddhist temple in Cambodia. This is his other mainstream film as a martial arts hero.

Horror was not his choice as a genre and Syonesa said he was happy with the role of producer. However, he was invited to audition for the role of detective by executive producer Edwin Olson, and B.E. Rogstad, writer and director.

“I was not going to do it because my genre is action pretty much, but when they saw how I did it they wanted me to get involved,” he added, noting it was the humor and naturalness that brought him the role.

The script, written by B.E. Rogstad, had to be adapted to what Syonesa said was a big budget Hollywood film. He said it works because they captured the essence of the story and made it work with a much smaller budget.

The filming started at the end of July 2010, and wrapped up in early September. It went into postproduction, which Synonese said was also all accomplished using local companies to transfer the raw footage to viewable stock and to undergo further audiovisual editing and special effects work.

The most noticeable elements of low or high budget film are with the sound and quality of the film itself, he said.

“We saved 60 percent by have the postproduction done here in Minnesota,” he said. ‘There are a lot of postproduction companies here that are as good or better (than California).”

He is currently in negations with a distributor over DVD and online sales rights. If that doesn’t work out then he plans on submitting the film to major film festivals including Sundance, Sacramento and a couple of horror film festivals in Hollywood.

Syonesa is able to chase his filmmaking dreams after a successful career with his own real estate and title company. Syonesa said his family is from Pakse, Laos. His father was a police officer and was forced to flee to Thailand, where the family joined him seven years later at the Ouboune refugee camp. He was just 13 years old when his family came to New York as refugees. They lived there just two months and went to Philadelphia.

He was 13 years old when his family came to Minnesota in 1991. He was happy because it was his dream to see the Mississippi River. They lived in South Minneapolis, where he completed high school.

He was an ambitious youth and wanted to become a pilot but decided on computer science and earned a bachelor’s degree from Golden Valley Lutheran College. He worked at Cray Research and continued studies at Brown University to become a programmer and continued working as a consultant for Cray and several other companies.

Syonesa said that led to a start up business in the new cell phone business. Business boomed and he sold it and entered the mortgage, real estate and title business, opening four offices after five years as LMC Mortgages, sold it in 2007 and it has since gone under.

“I had a good coach who taught me about how to get in and also how to get out,” he added. “I used my money to make the movies.”

He wanted to make good films and so attended New York Film School from 2005 to 2007. He learned how to make films and also how the film business works.

“I met so many people who were good writers and directors and it is amazing what associations I made with these people who helped develop my ideas,” he said. “My goal was to make my company bigger and to get direction from them.”

His big lesson was not to give in to the impulses to take big leaps when things are going well, he said. Success in this business is about taking small steps over a decade to get better.

“Don’t jump or it will fall,” he added. “Step by step means how long it takes to get to that point and you have to follow it, you can’t cheat on it.”