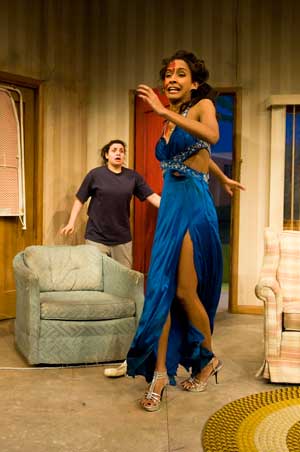 During the Sunday matinee of Somebody/Nobody, the current production at Mixed Blood Theatre, the audience giggled and laughed throughout the production. They really honestly seemed to be enjoying it. I kept on looking around me and wondering what I was missing. I didn’t laugh once. In fact, I was quite bored.

The premise goes like this: Sheena Keener (Elizabeth Grollon), a Hollywood B-List actress, shows up bloodied and desperate at the door of Loli (Taj Ruler), a down-on-her-luck young woman from Kansas who has $37 in the bank and who just got fired from her auto mechanic job. Sheena, on the run from fame, holds fort in Loli’s apartment. Loli cleans up Sheena’s wounds, offers her some sheets and clothes, and eventually Sheena dubs Loli her personal assistant “Priscilla.”

The script was written by Jane Martin, an anonymous playwright widely believed to be the secret identity of Jon Jory, former artistic director of the Actors Theatre of Louisville, who has directed the premieres of all of Martin’s shows. Perhaps the mysterious Martin has written herself (or himself, as the case may be) into the character of Sheena, desperate to get out of the limelight, while at the same time attracted by the attention.

The play seems to be satirizing the emptiness of Hollywood, although it doesn’t offer any new insight that the average People reader couldn’t already tell you. Sheena, for example, is so stupid that she thinks the production of Romeo and Juliet she was supposed to audition for to make her comeback is a re-mount of the ballet version. All of the unintelligent things that Sheena has to say made the audience laugh uproariously, but just left a bad taste in my mouth. Those kinds of jokes strike me as a bit misogynistic, because they reinforce the much overused stereotype that women, particularly beautiful women, are unintelligent.

Still, the actors all do a perfectly good job with the lame script. Taj Ruler, in particular, brings a lovely charm to her role as Lolli, and Mo Perry (dressed unfortunately in the most hideous costume I’ve seen in a while) brings a quirky energy to the stage in her role as Sheena’s manager Galaxy. As for Grullon, she does her best with the character, but it’s really a losing battle. Sheena is a completely unlikable character who really doesn’t change much throughout the course of the play.

I should disclose that, as an actress, I auditioned for this show. My dual life as an actress and journalist is definitely going to get me into trouble one of these days. Maybe that day is today.