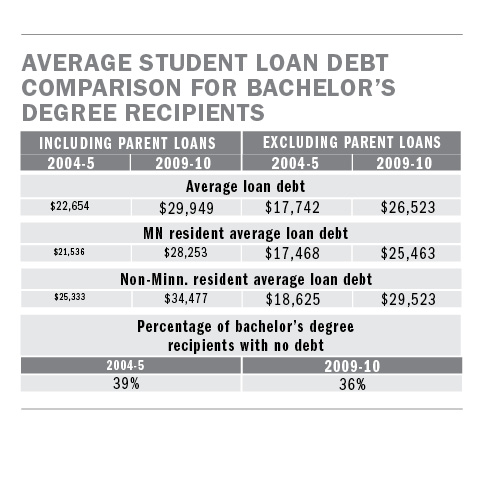 As a University of Minnesota junior, Taylor Kippels already owes about $25,000 in student loans.

The public relations major is financing college on her own dime and working two part-time jobs just to pay rent.

“If I didn’t get a lot of aid, it wouldn’t be possible for me to be here,” she said.

Kippels is not alone: Student loan debt in the U.S. is expected to exceed $1 trillion before the end of the year. But federal programs and initiatives are pushing for reform and transparency within financial aid and student loan processes.

As costs and tuition to attend college inflate every year, students are borrowing more money and defaulting on their loans, said Robert Moran, director of federal relations and policy analysis at the American Association of State Colleges and Universities.

Moran compared the situation in higher education to the housing market economic bubble in the mid-2000s.

If a majority of students went into debt and defaulted, he said, the bubble would burst. It wouldn’t have the same effect on the market as the real estate crisis — he said the federal government would have to recoup the money.

“That’s the only saving grace,” he said.

If a student borrower declares bankruptcy, he or she can’t shy away from the debt — that money would be recouped through options like wage garnishment.

“It’s certainly a big burden on the individual,” Moran said.

Starting July 1, 2014, borrowers will have their monthly student loan payments capped at 10 percent of their income, a reduction from the 15 percent income-based repayment program currently available, according to a White House press release.

It will also begin an initiative that would allow borrowers to consolidate Federal Family Education Loans with Direct Loans currently available, which would make payment easier by condensing two monthly payments into one.

Colleges are also looking to be more transparent about debt and financial aid.

The Consumer Financial Protection Bureau unveiled a “thought-starter” at the University Oct. 26. It’s a model format that could be sent to prospective students and would include their estimated debt at graduation, federal loan eligibility and more, said Rohit Chopra, student loan ombudsman.

He said the “Financial Aid Shopping Sheet” is a way for students to make a financial decision by comparing colleges and learning about the costs and risks of taking out student loans “before they sign on the dotted line.”

“We’re putting students at a strong financial footing early on so that they know what they’re getting into before they’re saddled with debt that might be unaffordable to them,” Chopra said.

University Director of Student Finance Kris Wright said with all these transparency efforts and programs to help borrowers repay their loans, a student shouldn’t default.

”There’s a point at which there really is no reason for a student to default,” Wright said.

The University posted its net price calculator over the summer, said Director of Admissions Wayne Sigler. All colleges were required to have such a calculator online by Saturday through the Higher Education Opportunity Act of 2008.

Wright said the calculator will allow students to find out everything they need by going to one website. She said they used a calculator designed by the higher education nonprofit College Board because it would include state grants when determining financial aid eligibility.

It does not, however, include merit aid, because that process is based on holistic review, she said.

Moran said most students just aren’t aware of the programs available to them to help them repay their federal loans. He said the “higher education bubble” won’t burst if students take advantage of these programs.

“I don’t think they understand the full impact of [taking out loans],” Moran said.

He said most students borrow under the impression that going to college will help them get a higher paying job that will enable paying the loans off once they graduate.

Kippels avoids thinking about the massive debt she has to pay back after graduation on a day-to-day basis, but she said it will be worthwhile in the end.

“I feel like I didn’t really have a choice,” Kippels said. “I need to get a degree and have an education and have that on my résumé.”