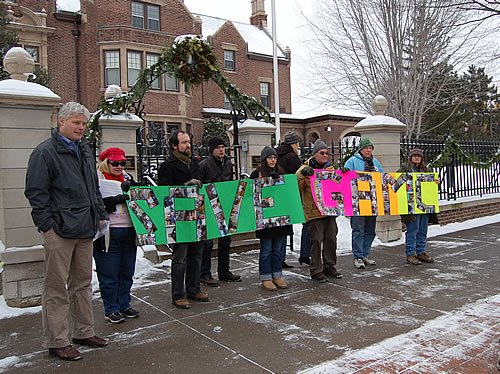 Members of the Save GAMC Coalition gathered outside the governor's residence with a message for lawmakers.

The demonstration was one of several held around the state by the Save GAMC Coalition. Medical services for 33,000 of Minnesota’s sickest and poorest residents are slated for elimination on March 1, 2010, due to Pawlenty’s line-item veto of funding for General Assistance Medical Care.

The coalition, led by members of TakeAction Minnesota, St. Stephen’s Human Rights Program, and Catholic Charities’ Office of Social Justice, read the names of 1,000 Minnesotans set to lose their health care if a solution is not found. In addition to the reading at the governor’s residence, similar events took place in several other communities, including Duluth, Moorhead, Winona and Worthington, the coalition said.

Participants at each site read 1,000 names so that in total, 33,000 names were called out – representing the average number of Minnesotans on GAMC in any given month.

“Thousands of concerned Minnesotans are calling for a comprehensive solution to the GAMC cuts, to ensure that the state’s most vulnerable citizens will continue to have the health care they need,” said Greta Bergstrom, speaking for the coalition.

The Legislature is considering alternative proposals to save the program, as well as the clients, hospitals and jobs it supports.

AFSCME members who do intake for MinnesotaCare said they are already swamped with a backlog of 10,000 applicants who have to wait up to three months to find out if they’re even eligible for the program.

Seide told legislators that a solution must accomplish three things: 1) retain access to health care for those now on GAMC, 2) avoid cuts to clients and hospitals, and 3) lower overall costs while preserving services.