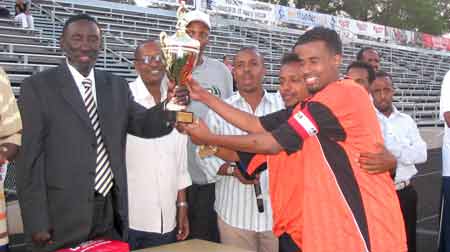 Leaders of the Djibouti team accept the trophy for winning the weekend Independence Day tournament.

Besides the bedeviled Black Hawk Down incident, the United States and Somalia share a congenial story that prompts many Somali Americans to celebrate it annually: The independence days for the two countries fall in the first week of July.

Somalia got its independence from Britain (north Somalia) and Italy (south Somalia) 184 years after the U.S independence, respectively on June 26 and July 1, 1960.

So, in the first week of July every year, hundreds of Somali Americans flock into the James Griffin Stadium in St Paul to watch a weeklong soccer tournament and festivals appropriately called “The Somali American Week.”

“This reminds me of back in the good old days when we had a country,” says Shamso Isse, 61, who brought her grandchildren to the stadium for the first time.

Two independence days; one community
“It’s a good way to tailor our Somali and American independence days and celebrate them collectively,” said Abdiaziz Warsame, the vice chairman of Somali Sports Committee of Minnesota, the organizing body, which comprises of mostly former national soccer and basketball players and administrators.

Warsame says private donations and gifts make up the bulk of the costly operations.

Eight teams, hailing from as far away as San Diego, to as local as Eden Prairie, compete for the prestigious trophy.

Warsame says this annual event gives his group nothing but a tonic feeling to witness the spirit of sports and music harnessing the Somali community.

And satisfaction seemed fit for the hundreds of boisterous Somalis who filled the James Griffin Stadium on July 1 to cheer on the two teams that made it to the soccer tournament’s finals—Djibouti and Mogadishu Young Starts.

Unlike the World Cup finals, which ended in a 1-1 tie in regulation between France and Italy on July 9 before Italy claimed the title in penalty kicks, the Somali American Tournament was full of action and excitement.

The victorious team represents the tiny nation of Djibouti, which has a 60 percent Somali ethnic population. They, too, were celebrating their independence day from France on June 27, 1977.

After the final game last year, Minnesota Thunder, the state’s Major League Soccer team, crushed an all star Somali team 7-0 in a friendly game, forcing the celebratory mode of the spectators into a jeering one.

This year, the organizers decidedly avoided such an embarrassing end to the tournament.