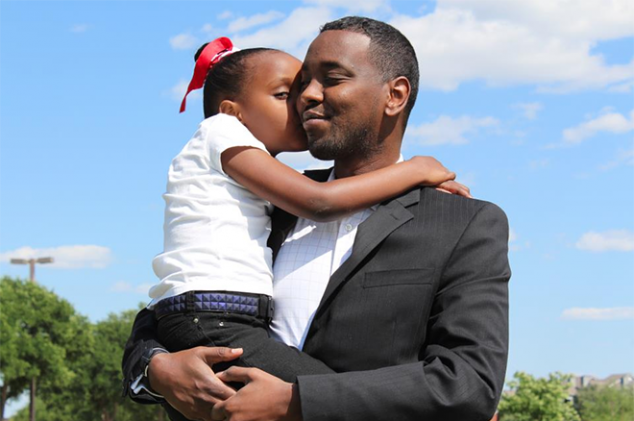 Abdi Warsame, seen here with his daughter, is the DFL endorsed candidate for City Council Ward 6 in Minneapolis. He is one of the top money raisers in Campaign Finance reports filed.

Cab drivers, IT workers and a host of the self-employed have catapulted Minneapolis City Council candidate Abdi Warsame to the top tier of candidates in the city in terms of fundraising. Should he win the election in November, he will be the city’s first Somali City Council member.

Somali-born Warsame is the endorsed Democratic Party (known as the DFL in Minnesota) candidate for the sixth Ward in Minneapolis after the incumbent Robert Lilligren withdrew from endorsement consideration at the DFL convention in the spring. Lilligren challenged the party’s endorsement of Warsame citing irregularities at the caucus but the State party upheld Warsame’s endorsement.

Warsame’s campaign filed its campaign finance report last week as required by law, and it shows for the reporting period in question (January 2013 to August 2013), his campaign raised a total of $11,700 from 45 individuals and total year to date revenues for the campaign totaled $24,835 against year to date expenses of $14,679. The campaign has a healthy cash balance of over $10,000. All donors to his campaign during this period gave a minimum of $200 with the majority giving $300 each.

Warsame’s main challenger, the incumbent Robert Lilligren, in the January-August period that the law requires filing for, had raised $9,250 from 39 individuals and year to date money raised amounted to $15,925 against expenses of $18,295. The campaign reported a cash balance of just over $10,000.

The law caps contribution limits at $500 per individual for Minneapolis mayoral races.

Warsame is not only proving adept at organizing the community to garner votes which resulted in winning the party endorsement, he is also proving equally successful at attracting money to finance the campaign. His cash haul, generated almost exclusively from within the East African community puts him at the near top in fundraising in all of the city’s 13 wards.

The cash haul signals the Somali community’s intent to put their money where their mouth is. They have become an important voting bloc in Minneapolis to ignore with some elections in the city becoming impossible for candidates to win without support from it. The sixth ward in Minneapolis which Warsame is vying to represent is a case in point with Somalis consisting of one of the largest voting blocks

Only two other candidates in all of the candidates running in Minneapolis’ 13 wards have more money at hand than Warsame. Both are veteran council members.

Campaign Finance law requires campaigns to indicate a contributor’s employer and for Warsame it runs the gamut. Contributors listed some of the state’s largest counties as their employers with professions ranging from IT, nutritionists and a sprinkling of professional managers with familiar Somali sounding names.

Warsame who has a Masters degree in International Business from Middlesex University in the United Kingdom where he grew up, has also attracted support from business owners in the Cedar-Riverside area, both Somali and non-Somali, who have given to his campaign.