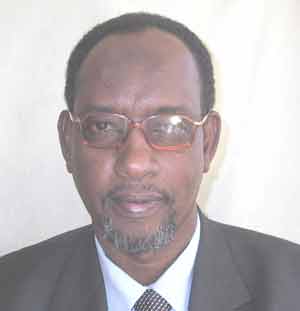 If you listen to Dr. Ali Bashi Omar, a Somali legislator who left home a week ago, speak to about 100 Somalis who gathered in Brian Coyle Center on Sunday, you’d think that the situation on the ground is getting better.

It’s not. In fact, it’s worsening in many ways.

Just in the last two days, more than 70 people were killed and scores more wounded in fresh fighting between militia loyal to the Islamic Courts Union (ICU), a powerful tribal-based sharia courts, and another militia led by Abdi Qaybdiid, the last remnant of a U.S-backed warlords who were ejected from Mogadishu last month after launching a self-styled antiterrorism coalition.

But somehow, Dr. Omar, a career ophthalmologist-turned politician and a senior member of the moderate Islamist group Al-Islah, remains utterly optimistic. Most of what keeps him hopeful is a second round peace talks between the ICU and the weak Transitional Federal Government (TFG) scheduled this Saturday in Sudan.

On June 22 the TFG and the ICU recognized each other and signed a nonaggression deal in Sudan, but the two sides headed for a collision course almost immediately. ICU forces recently dislodged militia loyal to the interior minister, Hussein Aidiid, from key positions in Mogadishu. Aidiid, a former U.S marine and heir to his late father, fired back saying that his government “will not negotiate with hardliner Islamists.”

The TFG is borne out of two-year long peace talks in neighboring Kenya 18 months ago. Six months into existence, and while still in exile in Nairobi, the 275-member parliament erupted in a melee over whether to send peacekeeping forces to Somalia or not. They split in half, one group bound for Mogadishu and the other 60 miles to the north in Jowhar.

On a Yemeni-brokered deal in February, the two former foes descended to Baidoa, 190 miles south of Mogadishu. Leaving powerful warlords behind, the parliament voted to bring the controversial peacekeeping forces to Somalia in June.

“We didn’t fight this time; we just voted,” said Dr. Omar, who talks simplisticly about the prospect foreign peacekeepers. “If everything goes according to plan this Saturday in Sudan, We might never need them.”

The powerful Islamic Courts Union, who now control much of southern Somalia including Mogadishu, have repeatedly vowed to wage “jihad” against foreign peacekeepers who set a foot inside Somalia. That led Sudan and Uganda to withdraw early promises to send troops to Somalia, “until Somalis can work out their differences.” they lamented.

The seemingly eternal chaos that has plagued Mogadishu and surrounding regions for 16 years, however, is now a thing of the past. ICU militia removed the cities’ notorious illegal roadblocks and plucked weaponry from warlords. The cost of living plummeted and rampant kidnappings halted.

The cunning and swift success of the ICU, which is far from a homogeneous group, is credited to the public’s frustration with the warlords who deprived them of peace. In punishing them, they rallied behind the ICU militia.

Though Al-Islah, Dr. Omar’s moderate Islamist group, didn’t participate in the armed conflict that ousted the warlords out of Mogadishu in June, he says they morally supported it.

But a letter expelling the erudite leader of the ICU delegation to Sudan from Al-Islah’s membership was far from moral support. Dr. Omar cited that the expelled leader failed to follow the organization’s “internal rules and regulations.”

U.S position
The U.S government has long been lukewarm about the situation in Somalia. But when the ICU militia embarrassingly defeated the longtime thorny warlords of Mogadishu, widely believed to be bankrolled by the U.S, a more cautious policy emerged. An American embassy official in Sudan met with the ICU delegation last month.

But with the nomination of a hard-line cleric, Sheikh Hassan Dahir Aweys, who’s on the U.S and the U.N list of terrorism associates, to the top job of the ICU, things turned rocky again. The State Department has effusively ruled out of any contact with him.

Aweys is a former military colonel who demands sharia law as the only viable constitution in the country. Since his promotion to the top job, the ICU grew more radical.

“If the U.S continues to use its global clout to support the TFG and its branches, we can be heading to a brighter future,” said Dr. Omar, who believes the U.S should also play a leading role in closing the gap between the TFG and the ICU.

A message from Minnesota
A leader in the Somali community, Sheikh Sa’ad, told the visiting legislator to pass on a message of “peace and national forgiveness” to the Somali people when he returns home.

Others in the audience seemed to be carried away by the glimpse of hope Dr. Omar seems to offer amid souring violence.

“He sounds more practical than most other legislators I’ve had the chance to hear,” said Abdulqadir Mohamed, a graduate student at St. Mary’s University in Minneapolis.