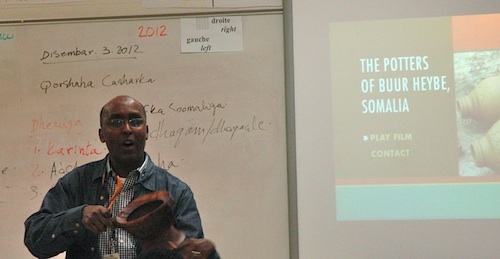 Minneapolis Public Schools have implemented two Somali classes — one that focuses on language and the other on culture, and the program is turning out to be quite popular, with nearly 60 students signing up for them. Perhaps that’s not surprising, as more than 2,800 MPS students speak the language at home, according to an MPS press release.

“The community has been asking for this,” said Minneapolis School Board member Hussein Samatar, who was instrumental in bringing the Somali classes to South. “The community and the parents want it,” he said. “It’s not my idea. It comes from the parents.”

Samatar began preliminary steps to realize the Somali language classes in 2011. The Somali community is a large and growing community, he said, and yet at the same time, parents and community members want the younger generation to retain the culture and language.

Samatar spoke with Superintendent Johnson about the need for the class, and she assigned to project to Dan Loewenson. From there, he began talks with the South High principal.

At first, Samatar said that one of the questions that came up was why students should learn Somali rather than Arabic. His response was than Arabic is not the language of Somalis.  “Somalis are Muslim, but that’s a religion,” he said.

Finally, Samatar suggested they try out a pilot program. They would get a teacher and see if the students would show up for the classes.

MPS ended up hiring Dahir Hassan who previously was an Educational Assistant at Northeast Middle School. “I’m passionate about this class,” Hassan said. “I didn’t know I was passionate about it until I started.”

Hassan’s first experience teaching Somali language and culture was actually while he was living in Mogadishu in the 1980s, educating German expatriates. His job was to teach social and economic concepts of the culture as well as the language at a German school.  At that time, he developed his own course syllabus as well as a training book.

Hassan was born in the middle of Somalia, but spent time in the Northern part of the region, so he’s experienced different ways of speaking the language and different cultural aspects of the different areas.

Most of the students in his class communicate in Somali, at home, but they also speak the language in a kind of broken Somali. “They think in English,” he said.

On December 10, I visited one of the Somali classes, which had 18 girls and seven boys present. (Several were absent that day.) The students watched a film in English about African pottery and then afterward, the teacher, Dahir Hassan, discussed the film with them, at times in English and at times in Somali. The boys, who mainly sat in the front of the class, were mostly silent, while the girls tended to be more active in the discussion, but also tended to get into trouble for speaking out of turn.

Most of the students in the class already speak Somali (with the exception of one from another African country and another who has only one parent from Somalia).

Ilhan Hashi, an eleventh grader, said she took the class, even though she already speaks Somali, in order to learn more about her heritage.

Magda Osman, another 11th grader, said she appreciates learning more about the history of the country where her parents are from. She also really likes her teacher, Mr. Hassan. “He helps us understand what we don’t understand,” she said. “We’re so caught up in American culture, he encourages us to speak Somali more.”

Some of the students are also involved with Emoja, an African club, where students from different countries in Africa can learn about each others’ culture. The club meets once a week, after school.

“Minneapolis can be a laboratory about progressive thinking around education,” Samatar said. Like the Hmong classes at Patrick Henry and the many opportunities to learn the Spanish language, Samatar said Somali community members want to make sure that their children retain that language piece of the culture.

This was clear to him a number of years again when then-Congressman Martin Sabo had a conversation with Samatar. Sabo had expressed to him regret that though he spoke Norwegian as a small child, because he never learned it in school and instead always spoke English, ultimately lost those language skills. “Please maintain your first language while you learn the English language,” he said.

That conversation gave Samatar insight. “We want to be Minnesotan,” he said, “but without heritage and culture, you don’t have anything.”