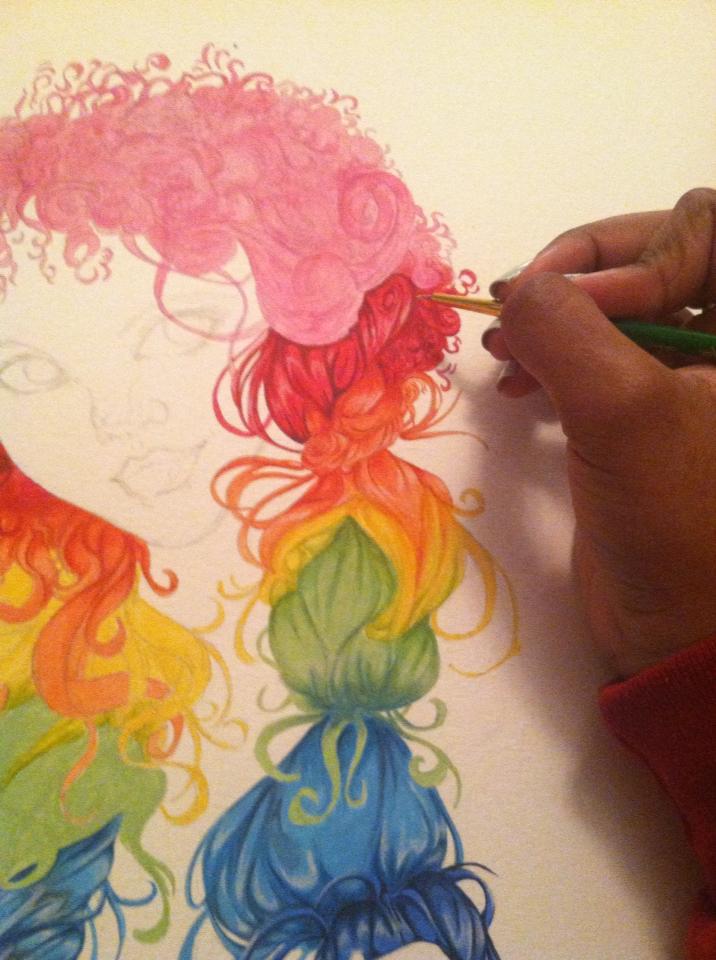 So, I’ve been sending this information out bit by bit and posting images for it, but I haven’t given an official announcement outside of Facebook. I’m in the process of setting up my very first solo show at the Smitten Kitten on July 6. I’ve been working around the clock on the pieces for it and as excited as I am to be presenting this new work I have to be completely honest…I’m absolutely terrified.

I only realized this a few days ago, but I just marked the three-year anniversary of the start of my art career. I haven’t been doing this for very long and I’ve come so far since then that I decided that now would be the best time to have my first solo show. That being said, I’m afraid I’ll screw everything up.

Since my career started my art has lived in a very small and constrictive box where its aesthetic changed very little and recently I have gotten bored with that aesthetic and tried to find something different. I don’t know if I’ve succeeded in making better art, but I would really like to show off the evolution to anyone who wants to take a look. I’m finally ready to show my peers and community that I’m an artist capable of more than what I’ve shown in the past.

I’ve wanted to do this for a while, but my greatest concern was finding a place to show the work. The idea of doing it anywhere else other than the Smitten Kitten gave me anxiety, which is why I was so reluctant in the first place. All of my experiences with the Smitten Kitten have been extremely positive and enjoyable; the staff is kind and supportive and they love my work there. I have no problems selling work and their opening receptions are always warm and social; I have lots of fun when I’m there and I think others will have fun there too.

Ironically, the one thing that I’m the least nervous about is the artist talk: where I sit in front of a crowd of people and talk about myself and my work. For some reason that doesn’t bother me at all. Maybe I’m an arrogant narcissist in that way, or maybe I figure that because I talk to myself so much it would be beneficial to have more people to talk to; at least that way I seem less insane. But mostly, it‘s a good excuse to meet and connect with people who like my work and thank them for their support.

I know this sounds like some entry on LiveJournal but I’m writing this so I don’t have to be alone with my worry. The fear, the doubt, the uncertainty makes me want to reach out for support because I really want this to work out and it helps to know that there are people out there who believe that I can do this.

Besides, therapy is far too expensive.