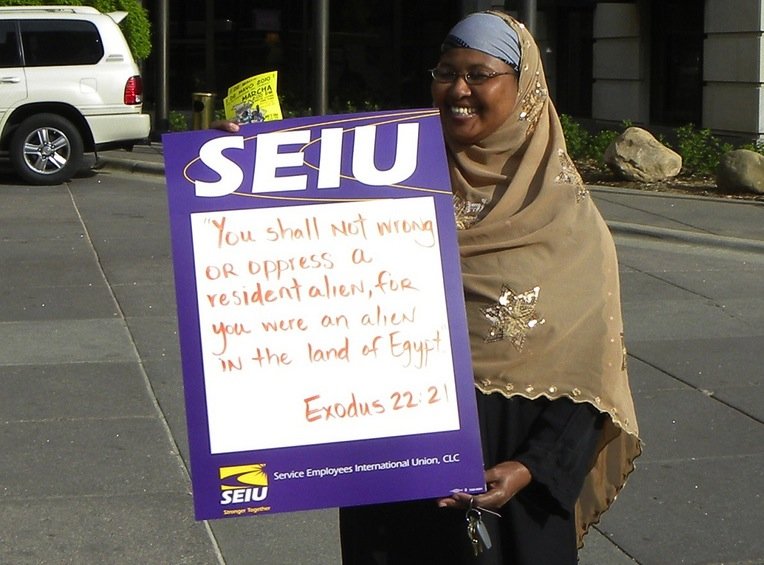 I always love getting email from Peter Rachleff, my friend and mentor who has recently begun contributing to the Daily Planet. At the end of each e-mail, he writes, “solidarity”—which I’ve always enjoyed, though I would never feel comfortable writing myself. It makes sense that he uses the term as a historian of labor, immigrant, and African-American history, as it clearly has historic meaning both within the labor movement and also amongst various civil rights and other activist struggles over the years.

I’ve been thinking about the term even more in the past few weeks as I’ve been doing interviews prompted, in part, by Rachleff’s suggestion. It started when I wrote two articles around the same time a few months ago about conflicts that were happening in the local Liberian community as well as the local Eritrean community, where the politics of refugees’ home countries were the cause of conflicts here in the Twin Cities. Rachleff has given me suggestions for a couple of other people to talk to whose work has crossed over from “old country” to “new country” and how that plays out in different ways.

So far I’ve interviewed Teresa Ortiz, who was involved in the student protests in Mexico City in 1968, and has spent a lifetime of activist work both in the Central America and in the United States; as well as Mike Whelan, a fourth-generation Irish immigrant and Vietnam veteran who was very involved in united Ireland struggles. Both of those pieces are coming, but in the meantime, I’m struck by one thing that has come out of those conversations as well as other interviews I’ve done with various activists who were around during the 1960s and 70s, and that is, there seemed to be more of a sense of people fighting different struggles working together than perhaps there is today.

I remember interviewing Ricardo Levins-Morales (another Daily Planet contributor) a few years ago, and he talked a lot about how people working with feminist causes would help out with the Black Panthers, and how various groups in civil rights, labor, and anti-war movements would all have a sense of working toward similar goals. Others whom I interviewed for my research project about Minnesota theater in the 1960s and 70s also talked about the collaboration among causes but also among artists working in different mediums.

Of course I wasn’t alive during that period, and perhaps I have an idealized version in my head of what it was like, but the more I talk to people who were there, the more I believe there really was more of a sense of unity amongst members of different movements than perhaps there is today. I’m not sure why that is, but I wish that there was more of that today—where people advocating for the arts, for example, would also lend their support toward anti-racism initiatives, where activists fighting for LGBT, labor, civil rights, housing rights, immigrant rights, etc., could have more of a sense of collaboration. I’m not saying it’s not happening at all right now, but I have a feeling it’s not as much as it once was. Perhaps some of you who were around in the 1960s and 70s could weigh in on my theory; if you agree that there is less “solidarity,” why do you think that is?