In August 1993, I boarded a plane at MSP—that was back when your family could come right to the gate to say goodbye, and watch you walk down the jetway—and flew to Massachusetts to begin my freshman year at Boston University. I’d never even been to Boston before. I took a cab to my dorm, and stepped out to find myself in a neighborhood that looked nothing like the ivy-filled viewbook pictures and everything like University Avenue in the vicinity of the Midway Shopping Center. My dorm looked like it had been airlifted from East Berlin, and my first friend was a willowy girl from Texas who was so pale that I wondered whether she was albino. No, I didn’t hook up with her, nor did I hook up with her Latina cheerleader friend, 120 pounds of solid muscle who I staggered up Commonwealth Avenue carrying piggyback after the fall orientation dance party.

Thanks to my roommate—a St. Paul Academy grad in the habit of leaving our door open and buying a couple of pizzas to share with passersby around 2 a.m. every morning—I soon made more friends. Being disinterested in the general run of the BU social scene (think punch buckets, weed, and closed doors with telltale socks hanging from the top and Massive Attack booming from inside), we often found our way over to Harvard Square to watch old movies at the Brattle Theatre. Some of my friends had Harvard friends, and I heard legends of the lives of luxury Harvard students led. The school would give you money to do research. You could bring anyone you wanted into your dorm (BU made you file paperwork to host overnight guests, who could only be of the same sex), and you didn’t have to move out during school breaks (one of my BU friends would go over to stay with his Harvard friend during breaks, and they’d watch the complete run of Twin Peaks on VHS). At Harvard, you were actually given the freedom to take food out of the dining hall. Amazing!

Harvard, of course, didn’t just have the creature comforts—it was Harvard. I remember a BU party where two people I didn’t recognize showed up and were elusive about where they went to school. When they admitted they went to Harvard, their corner of the room went silent. What were you supposed to say to someone so smart? I remember walking through Harvard Yard late at night, looking at the brick dormitories and wondering what the people in there were like. What was it like to be that brilliant, that lucky, to have the world in the palm of your hand?

During the opening credits of The Social Network, Mark Zuckerberg (Jesse Eisenberg) is seen running through the real-life Harvard Square, past Out-of-Town News and Au Bon Pain. Then he runs through a gate and enters the Harvard of dreams. Through an impressive array of visual tricks, director David Fincher laces the scene with recognizable Harvard details, but Eisenberg—who’s actually running through the campus of Johns Hopkins University—just keeps going and going and going, with one Georgian façade yielding to another in an almost Escher-like profusion of quintessentially collegiate architecture. It’s exactly what people imagine Harvard looks like, and it’s exactly how Harvard felt to me when I looked at it through my 18-year-old eyes.

The Social Network completes the task begun by writer Ben Mezrich in his book The Accidental Billionaires, abstracting the true story of Facebook’s 2004 founding into a parable about power, betrayal, and fantasy. (I previously blogged about the book.) The airbrushing, inflation, and editing of Harvard is more true than the truth would be, because it feels true. That is how people see Harvard, and that’s why after graduating from Boston University I borrowed $25,000 to buy a single year at the Harvard Graduate School of Education, a one-year Master’s program that had an admission rate around 50%. I ended up spending a full decade at Harvard, making my way over to the Department of Sociology where I was taught W.I. Thomas’s maxim that a situation defined as real is real in its consequences.

When I saw The Social Network tonight, I was amazed to discover that, in a departure from Mezrich’s book, Mark Zuckerberg is given an object of tragic obsession, a girl he loses in the first scene and spends the rest of the movie pining for even as he makes billions of dollars and flirts with Victoria’s Secret models. And she goes to BU.

The relationship is largely a flight of fancy on the part of screenwriter Aaron Sorkin, but it rings true in a manner that even Sorkin and Fincher may not have realized. In my last five years at Harvard, I was a resident tutor at Pforzheimer House (its dining hall, which in real life looks kind of like the library in The Breakfast Club, in The Social Network is made to resemble high table at Oxford), and was party to innumerable debates about the social life at Harvard College. The Final Clubs that figure so prominently in The Social Network are aspired to by only a minority of Harvard undergraduates, and are regarded by the rest of the student body with feelings ranging from morbid curiosity to indignant disgust to shoulder-shrugging indifference.

A point of conventional wisdom among many Harvard undergrads is that the Final Clubs are as successful as they are in part because the rest of Harvard does not party sufficiently often, or sufficiently vigorously. The Harvard administration, of course, is seen as squelching undergraduate social life by means of restrictive moves like limiting the number and conditions of on-campus parties—yes, authorized in-dorm parties with alcohol, a practice completely verboten at BU. Those dorm parties vary in quality from robustly raucous (at 3 a.m. one morning, I had to stick my head out a skylight and talk sense into a student who didn’t seem entirely aware that he had climbed out the window and was sitting on a steeply sloped roof five stories off the ground) to uncomfortably awkward, and they’re the most accessible means of weekend recreation for the 97% of Harvard undergraduates who live on campus. 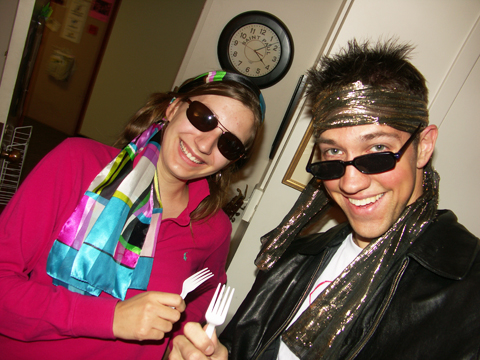 Is Harvard a fun place to go to school? Of fucking course it is. I had way more fun at Harvard than I did at BU, if for no other reason than that I was among a lot more people whose idea of fun was similar to mine. I don’t think that most Harvard students would actually have more fun going to school at BU, and most of them, most of the time, know that—but nonetheless, on many occasions I heard Harvard undergrads unfavorably compare their school’s social life to that found at the “party schools” lauded in movies and magazines. Students would go to visit their friends at state schools and come back with stories of wild bacchanalia that would make their Harvard classmates sigh with envy. Bonfires! Frat parties! Athletic competitions routinely attended by significant portions of the student body, who cheered unashamedly and without a hint of irony! Even my BU pedigree was occasionally a subject of some fascination. “What did you do on weekends?!” Well, I’d go to a party in an Allston apartment, get drunk on hard cider, and vomit tidily into the same paper bag the six-pack came in…but enough about me.

In a sense, The Social Network isn’t actually about social networking sites. Facebook is a MacGuffin, that thing that vaults Zuckerberg to fame and fortune. Change a few lines of dialogue and Steampunk the cell phones, and The Social Network could be a movie about a 19th century railroad baron. But the movie has the idea of Facebook right: its exclusivity, its sense of layers upon layers of restricted access. Even the 2010 Facebook, which is so public that even Hillary Clinton’s hair clip has its own page, still has the DNA of that Harvard-only 2004 Facebook, the sense that you only see what you’re privileged to see. The “networks,” which were once fortresses closed to the outside but open on the inside—if you were on the Harvard network, you could see just about any Harvard profile, but no Yale profiles—have been de facto replaced by the “friends of friends” privacy setting. Not just anyone can see these pictures of me playing beer pong, but if you know someone I know, then okay, you can see them. Never mind that for the average Facebook user, friends-of-friends number in the tens of thousands—it’s the idea of exclusivity, which Facebook still somehow manages to communicate.

I don’t even remember the name of my first, pale BU friend, but I remember the name of the woman I had an epic crush on when I was a senior. She was an actress; I saw her in No Exit at the BU Armory, a building that’s since been torn down to make way for a dorm complex that looks more Abu Dhabi than East Berlin. My former crush and I are not Facebook friends, so I just now looked her up. There are a couple of people with her name, and neither has a profile picture showing her face. Is this her? With a married name appended, and a baby as her profile picture? I don’t know. Even the new Facebook won’t tell me. Who is this person? What does she do? What does she look like? What does she think about? Is her life happier than mine? Does she ever think about me? I don’t know. I can only guess, and imagine, and send a friend request that may or may not ever be accepted.