The newlyweds in character, above, and at their wedding, below. Photos courtesy Carrie and Benji Conklin.

This past Halloween night in the Soap Factory’s Haunted Basement, Benji Conklin and Carrie Fisher met for the first time. Within hours, they had their first kiss. 11 days later, they were married.

“My friends’ initial reaction,” says Carrie Conklin, 30, “is, ‘What? I didn’t know you had a boyfriend—and now you’re married? But after that subsides, everyone’s been nothing but thrilled.”

Benji, 33, acknowledges that the courtship was quick, but is certain he’s found the love of his life. “It’s interesting to start with the commitment and figure everything else out afterwards. I figured out early on that I’d met my wife, so I decided to marry her.”

Benji, a country-rock music performer and teacher, has been among the Haunted Basement’s creators since 2006, known in Basement circles as “year zero” because the fire marshal shut the operation down before it opened to the public. The Haunted Basement officially (and legally) opened in 2007, with Benji doing sound design and acting on the scare patrol.

Carrie, who works as a server at Brasa in St. Paul, just started volunteering in the Haunted Basement this year, doing makeup and also acting. Though she and Benji both worked throughout the exhibit’s October run, they didn’t meet until the last night of the run: Halloween itself.

“Neither of us was even supposed to be there,” remembers Benji—there were enough volunteers to staff the attraction, and both had been told they could stay home. Both, though, decided to stop by to enjoy the climactic night of the season.

“I was sitting in the audio room,” says Benji, “and she came in and said, ‘So this is where the cool kids hang out?’ I passed her a beer, and we had a brief conversation. After that, I was just meandering backstage and she was going to go out and act. She said, ‘Well, why don’t you come in the dark room with me?’

“When you’re in that kind of environment,” continues Benji, “you have to get close to talk—there has to be physical contact. The way our conversation was going, the chemistry was there, and I planted a kiss on her. That got the ball rolling, and from that point on we were pretty much inseparable.”

Carrie remembers that Benji was Teen Wolf for Halloween, “so he’d been letting his hair down—lots of facial hair and pretty long hair on top, too. That’s not really my type, so when things were getting intimate, I second-guessed it for a moment—but just for a moment, and then I felt really excited to have met this guy. We haven’t been apart since.”

Eight days later, the couple were hanging out with friends at Lush and, says Benji, “we decided, let’s get married! We hadn’t even established boyfriend-girlfriend yet, but 11/11/11 was right around the corner, and we thought that would be neat. We put a wedding together in three days and got married in the Ramsey County Courthouse.” 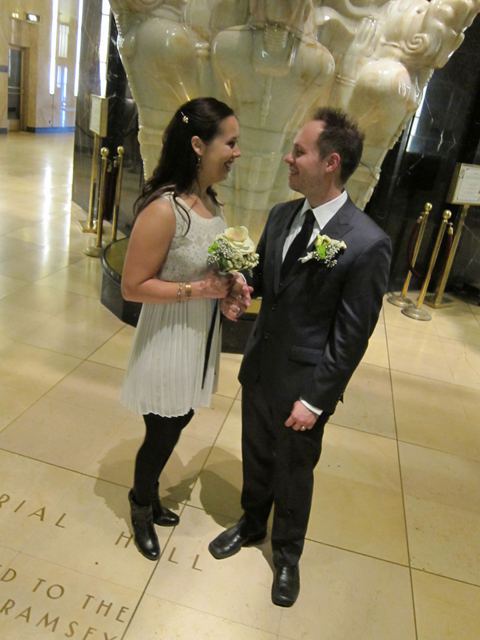 Benji met Carrie’s family when the newlyweds traveled to her family’s home in Austin, Minnesota for Thanksgiving; for Christmas, they’ll travel to Benji’s home town of Marinette, Wisconsin so Carrie can meet his family.

“I never meant to emulate my parents’ love story,” says Carrie, “but they had been together for just a couple of months when they were married on 12/12—and they’re still happy, 31 years later.”

Benji says that the sudden romance is “par for the course” in what’s been a life of “very rapid 90 degree turns that have always led me in the right direction. I never even necessarily saw myself getting married,” until his fateful Halloween encounter. “After that, I did.” 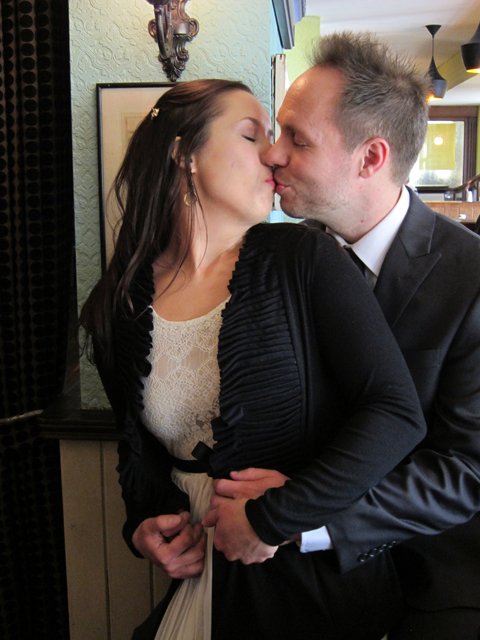