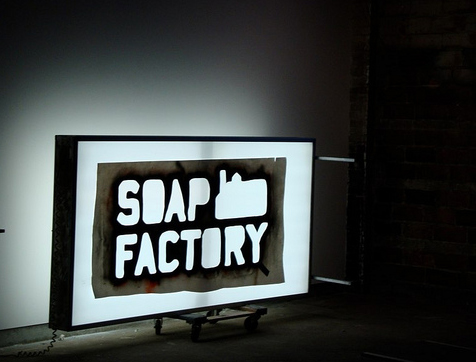 The holidays are all about tradition—how many times have you watched It’s the Great Pumpkin, Charlie Brown? If you’re like me, twice this year already. Paradoxically, though, what’s turned the Soap Factory’s Haunted Basement into such a popular local tradition each October is the fact that the belowdecks horrors are always different. People are still talking about the blindfolded-wheelchair experience of 2009, but one of the few things you know as you descend into the depths this year is that you won’t be blindfolded and strapped into a wheelchair. That was then, and this is now. (Click here for links to our coverage of previous years’ Haunted Basements.)

The Haunted Basement attracts throngs of people who never set foot in the avant-garde gallery otherwise; among them is my sister Julia, who needed to have explained to her why there are currently giant beer cans and a working thrift store in the gallery. Julia and I were among the very first brave (or, in my case, not so brave) souls to venture into this year’s Haunted Basement; it was Julia’s first time, and her uncomfortable half-hour began with having to remove her high heels and don a very used pair of flats lent to her for the purpose of negotiating the unpredictable surfaces to be found in the basement.

I won’t spoil any surprises by going into detail about what we survived, but suffice it to say that, as in previous years, the Basement experience unfolds in a series of nightmares. There’s no narrative as such, but a few themes emerged from the work of the dozens of artists who created this year’s installation: ruined childhood, horrific parties, edible inedibles, the impossibility of escape, and the violation of personal space.

That’s right: the actors in the Haunted Basement can and will touch you. Grope you, even—not in a sexual way, though you might prefer that to what actually happens. They also taunt you, quiz you, breathe on you, and drop on you unexpectedly.

Sound like fun? Yeah, not to me either. I was a total ‘fraidy cat in the basement—in contrast to a guy who charged forward leading his girlfriend by the hand, I wouldn’t even let my sister hold my arm. “If they see we’re scared, we’ll become victims!” I whispered desperately. But even for a guy who hates haunted houses, the terrible (in a good way) immersive art on display in the Haunted Basement is not to be missed. I survived, and so can you. You’ll live to tell the tale, but not to regret it.

Photo by Okeefew (Creative Commons). Coverage of issues and events that affect Central Corridor neighborhoods and communities is funded in part by a grant from Central Corridor Funders Collaborative.