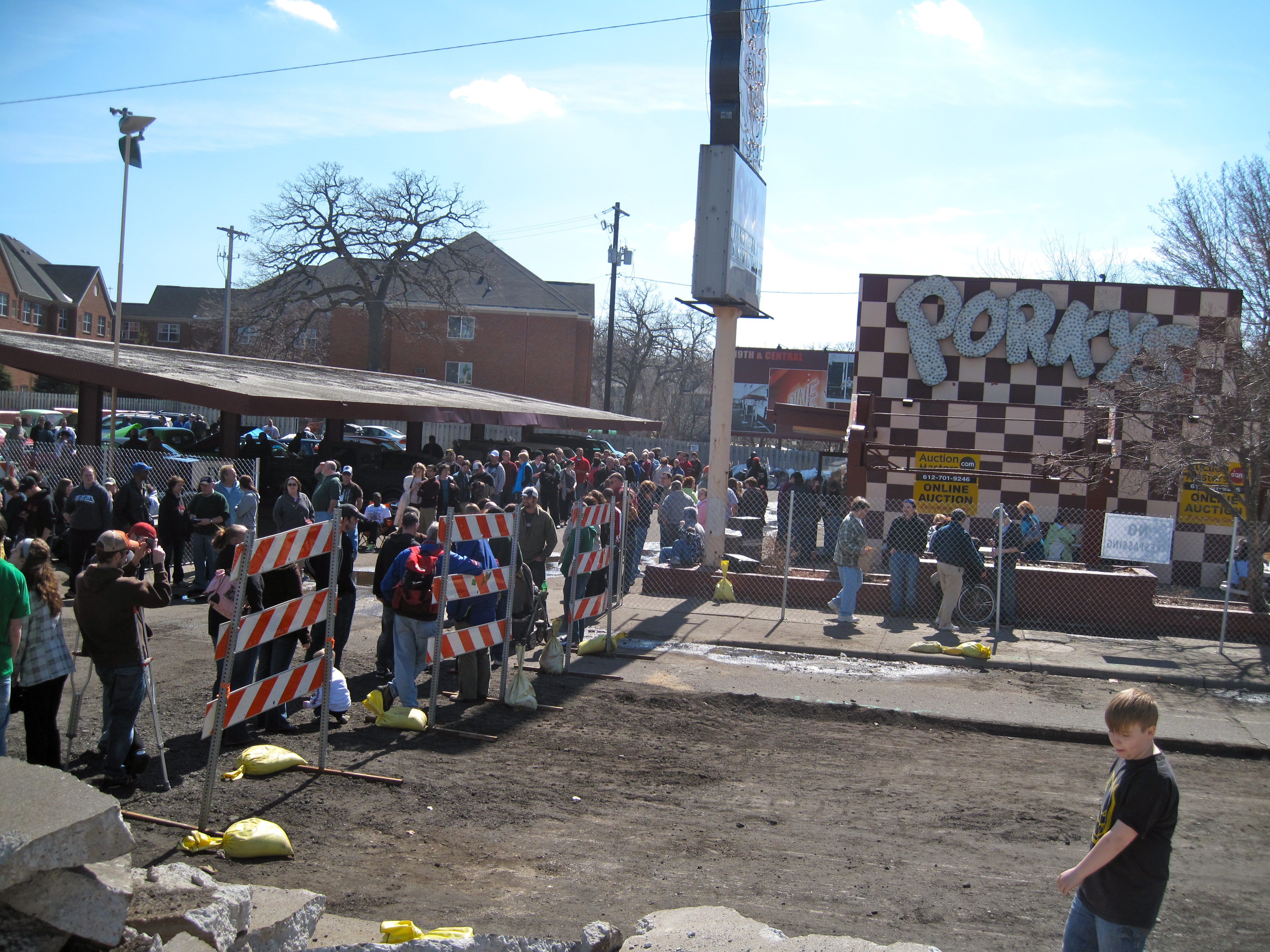 Crowds lined up at Porky's on Saturday afternoon, waiting for one last chance at the legendary drive-in. (Photo by Sheila Regan)

Hordes of people have been waiting for hours on end at Porky’s Drive-In to get a chance to have one last meal at the beloved remnant of mid-20th-century Americana before it closes its doors at the end of the weekend. Whether they were recent regulars or hadn’t been to Porky’s for years, people say they’ll really miss the place, the fabulous cars, and the legendary onion rings.

Terry Kelm had been waiting for two hours on Saturday with his wife and kids.  “My Mom and Dad met at the drive-in in the 1950s.”  His grandmother was a manager, and his mom was a carhop.  His dad owned a hot rod, and it was love at first sight.  In fact, a picture of his father’s old car is on the wall inside. Helm has been coming to Porky’s his whole life, though in recent years it hasn’t been as often as the “scene changed,” but still, he said, not many people can still go to the place where their parents met, and he’s sorry it won’t be around anymore.

Bob Dunaski, Sr. has been a more frequent customer, coming to Porky’s every Friday night with other old car enthusiasts.  An owner of a 57 Ford Galaxy two-door hard-top, he’s been coming to Porky’s for 21 years.

His friend, Don Jensen, said their group hasn’t figured out where they are going to meet instead.  “This place had a great atmosphere.  I made a lot of friends over the years, whether they were bikers or car guys.”  Jensen said the group didn’t try to persuade the owner to change his mind, because by the time they heard about it, it was a done deal.  “I don’t blame him,” Jensen said.  “The construction was really hurting his business.”

Sandy Swanson used to come to Porky’s all the time when she was a teenager in the 1960s.  Porky’s was one of three joints they would cruise to on Friday nights.  “You didn’t buy anything, you’d just be showing your cars,” she said.  Over the years, she stopped coming as frequently, but would show up for special events.  “I guess we never really appreciated it enough while it was still around,” she said.

Angie Rash, from the band Mental Puke Relief, said she and the other band members used to come to Porky’s a lot more often when there was a record store right nearby.  “I love the old cars, and the nostalgia,” she said.  “I’m going to miss this place,” she said.

One thing’s for sure, Porky’s meant a lot to many different people.  There are all kinds of memories that go along with a business around for as long as it has been around.  It was an iconic destination, shining with style, and with the best onion rings in town.