“1 Tip for a Tiny Belly” is everywhere. Don’t you ever wonder how this crap — and thousands of ads like it — can keep on being published every day? Now, reports the Washington Post, the Federal Trade Commission is suing some of the “Tiny Belly” crowd. ﻿

With tens of billions of ads viewed, “Tiny Belly” is the tip of a marketing iceberg based on a solid foundation of lies, deception and fakery, according to the feds. The scam works via a sophisticated marketing set-up, with lots of semi-independent affiliates placing the ad via Google and then raking in the profits. With the “Tiny Belly” ad alone, consumers are out more than a billion dollars. ﻿

Click on the ad and you go to another site, set up to look like a news site. I did, several weeks ago, and found a TV news report, with the reporter saying that initially they were skeptical of the claims, but then they tested the products and it was all true.  Smelled like baloney to me at the time, and now the Washington Post and FTC confirm that my nose was right:

The sites typically feature an article in which an attractive young TV reporter “investigates” the benefits of a diet involving a series of products. Sometimes the products are made from mangoes or acai berries … [or] from human chorionic gonadotropin (hCG) …

All use what the FTC contends are fake articles. Several used the photo of the reporter supposedly investigating the diet. The woman identified as “reporter Julia Miller” on some of the sites is actually a French newscaster, Melissa Theuriau, who has said she was unaware that her image was being used this way. The endorsements from the real news organizations, such as CNN or ABC, are a sham, too, the government says.

The FTC is suing the companies involved, and part of the deception they allege is “that sites such as Consumeronlinetips.com aren’t legitimate news organizations.” The FTC also found a fine-print disclaimer that I didn’t see:

The Washington Post itself has run the ad. It’s part of the package served up by Google, which provides a rotating cast of ads to fill unsold ad space and generate some advertising income. (FULL DISCLOSURE: TC Daily Planet tried to use Google ads a couple of years back and found they were a hassle not worth the minuscule amount of money generated for us.) 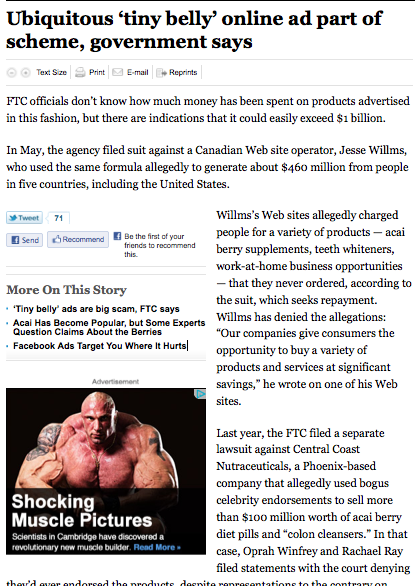 The WaPo article quotes an FTC official as saying, “Seeing it on the Web site of a credible news site gives consumers the false confidence that they’re not being tricked.” The article also quotes a Post spokesman as saying that the newspaper is “reviewing the situation.”

In the meantime, another Google ad – for a “revolutionary new muscle builder” – appearing in the very Washington Post article that debunked the phony “Tiny Belly” ad. 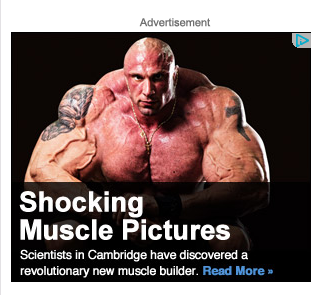 Criticism of news media for running misleading ads is nothing new, unfortunately. Remember the 2009, and ongoing, controversy over the Star Tribune‘s “Amish Heater” ads?

While I have deep sympathy for the arguments that fact-checking articles and chasing typos is hard enough, that ad departments and news departments are separate and should stay separate, and that news media desperately need ad revenue, that FTC statement keeps echoing in my mind: “Seeing it on the Web site of a credible news site gives consumers the false confidence that they’re not being tricked.”﻿

News media don’t do fact checks on the ads that they run. ﻿Somewhere, though, shouldn’t there be a smell test?