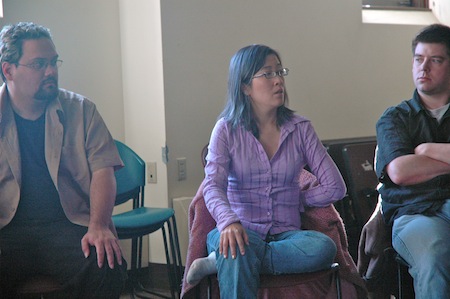 Organizers and participants from SlutWalk Minneapolis met at Hosmer Library for a Town Hall meeting last weekend to rap about worked, what didn’t, and what direction the organization, which has a goal of becoming a nonprofit, can go from here.

One of the topics that the group discussed was finding the balance between creating a safe environment for rape survivors to make a statement against rape culture, and creating a highly visible route for the walk that raises the most awareness. For the most part, everyone felt that crossing the Stone Arch Bridge and the Hennepin Avenue bridge were hugely symbolic, although some said that during the walk between the two bridges, there wasn’t a huge amount of people to watch the marchers. Would the walk be more affective if it happened on Nicollet Avenue, or even along Broadway in North Minneapolis? One element that the group hopes to expand on is the time spent at a place they choose as the home base for the event, so that there might be a whole day of activities.

The group also discussed how to engage in outreach with different cultural communities, so that women and men would feel more comfortable participating. Jen Grimm, SlutWalk Minneapolis’ Campus Outreach Coordinator, said that in her talks with the Aurora Center (the U of M’s rape survivor support group) about feedback from the event, she was told that some cultural groups didn’t want to participate, because it was culturally inappropriate to talk about rape or even dating. “To them it just doesn’t happen,” she said.

The group then discussed doing a Town Hall forum on the University of Minnesota campus to garner interest from students of different cultures and find ways to engage with people of varied backgrounds. “We want to make changes for future generations,” said Kimberia Sherva, SlutWalk Minneapolis’s organizer and social network coordinator.

Another issue discussed at the meeting was how SlutWalk Minneapolis could become more than just a walk that happens once a year. “Rape culture isn’t just once a year,” said Sherva. To that end, she hopes that the organization will be able to engage in a variety of outreach and educational activities, in addition to fundraisers throughout the year. For example, SlutWalk Minneapolis is hoping to host Open Mic nights four times a year in Minneapolis, St. Paul, and two suburbs, and to host presentations at criminal justice programs at community colleges, at law schools, and with the police. In addition, they hope to partner with Planned Parenthood to do outreach classes for young people.

As the organization grows to include activities throughout the year, Sherva said that the group is in discussion about whether to have a name other than SlutWalk Minneapolis once they become a nonprofit. The idea would to find a clever name that would encompass all of the years’ activities, not just the SlutWalk.

However, not all the people at the meeting agreed that a separate name was a good idea. Gordy Gusafson, for example, said that the name should remain SlutWalk Minneapolis, and Laura Nevitt, President of the DFL Feminist Caucus, said that it was important that if a separate name is chosen, the organization would need to be transparent about the connection between the broader organization and SlutWalk Minneapolis, which at least at this point is the main activity.

Finally, the group talked about the use of the word “slut” in the title. “SlutWalk is nothing more than a publicity stunt,” said Aaron Anderson, but he still feels it’s a serious movement. Still, Anderson said that taking back the word slut perpetuates the problem, much like taking back the “n” word doesn’t minimize its negative effect.

Gordy Gustafson pointed out that the mission statement doesn’t require people take back the word slut, and Laura Nevitt agreed and said SlutWalk is going to mean something different for everyone.

Beth Johnson, however, does reclaim the word “slut”. “I’m a sexually promiscuous woman,” she said. “Take that!”