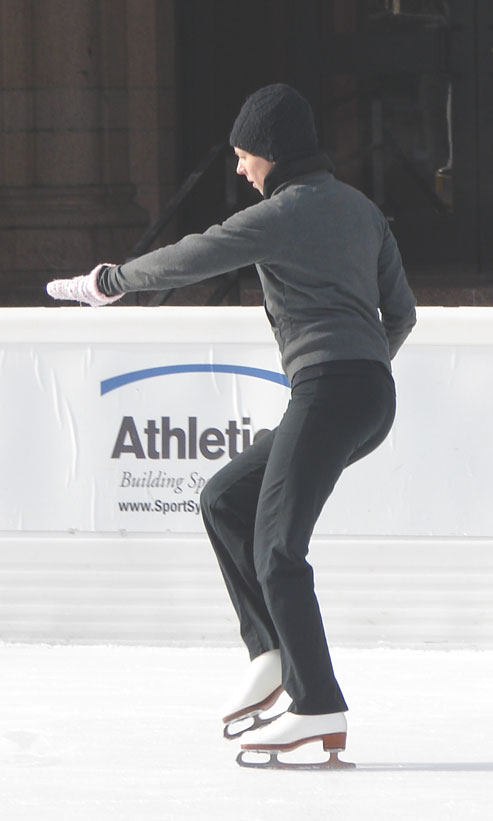 The day was gray and dim, but Rice Park clattered with the whir of preparing for the Winter Carnival Ice Sculpture Contest.  As workers tramped the snow and hauled the heavy blocks into place, a few steps away a bright and sparkling quiet called in the softer voice of Minnesota tradition: the Wells Fargo Washington Street Ice Rink, snug up against Landmark Center.

“I come here to take a break from work, get some exercise, and relax,” said Beth Janetski from the Science Museum of Minnesota.  “I prefer skating to just about any other activity.  It’s the one exercise we have downtown.”  She laced up her skates with a practiced yet carefree blur of activity as she talked.  “I’ve taught many people how to skate out here.  Last year there was a three year old with an incredible sense of balance who got it right away.”  A soft-spoken confidence punctuated her story.  “His mom wasn’t sure if he should start yet, but I told her he was ready.”

As Janetski laced up in the warming house, others on the bench next to her were not so sure.  “I have never been on ice before,” said Ka Moua.  “I have been in this country one year.  It is very exciting to try something new.”  Moua was there with his English class from Lao Family Services, taught by John Lund.  His skates slipped on under Lund’s watchful eye to make sure his students were getting set up properly.  “Ice skating is a traditional part of a Minnesota winter,” he said, with a purposeful sparkle in his eyes.  “Some of them have seen it on TV, but none of them have experienced it for themselves.”

The rink itself is just big enough to host events like the Pond Hockey Tournament as a lead-in to the St. Paul Winter Carnival.  Mostly, it belongs to the people who show up for the Free Skate, weekdays from 11-5.  Skate rental is $2, what Lund calls “A price that can’t be beat.”

Out on the brilliant white ice the scene was a fluid chaos.  Janetski flew around the rink, getting in the exercise that would propel her through the rest of the day.  Moua was not much less careful with his new adventure, if a lot less graceful.  He held onto his teacher’s hands at times, laughing through his new adventure.  Every minute was as invigorating as the bright cold in this space apart from the city.

Throughout the lunch hour the rink moved in fits and swirls as the experts and first timers laced themselves up and clicked out of the warming house.  “I see about a dozen regulars every day,” said Dan, the man in charge for Parks & Rec, “But the big crowds come with the Winter Carnival. It’s a real draw for the city and everyone loves it.”  He smiled like a guy who really enjoys his job.  “A lot of people don’t know it’s here until they come to the Carnival.  They all have a blast.”

Just across the street, the center of Winter Carnival is nearly ready.  The thrones are in place and evergreens are arranged around the fountain to create a stage of regal adventure, a place apart from the ordinary gray above.  The great 125-year-old tradition of Winter Carnival demands nothing less as it settles into Rice Park, ready to shine through another year.

At the Washington Avenue rink, the blur of activity continued.  Everyone out on the rink had their own style, their own story, and their own time apart in the middle of the city. 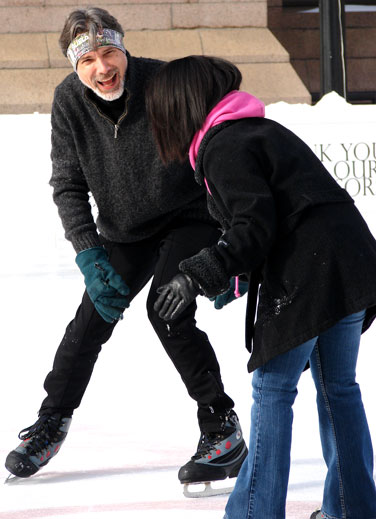 John Lund laughs with a student on the ice.