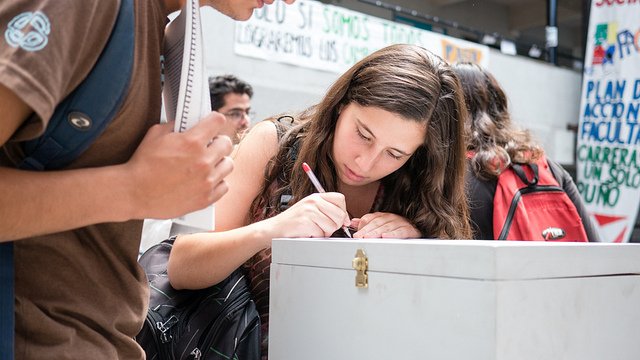 Younger voters are known for their low turn-out rates, but in 2012 they showed up in record numbers and helped decide the fate of the presidential election. While the president isn’t up for re-election for another two years, there’s still plenty of reasons for younger voters, particularly colleges students, to vote this year. Here’s six reasons why young voters should practice their civic duty on Election Day.

1. You’re a target demographic this election

This year’s election season has a few competitive races in student-heavy districts that young voters should look out for.

In District 60B, which includes neighborhoods around the University of Minnesota-Twin Cities, incumbent Rep. Phyllis Kahn, DFL-Minneapolis, is facing a strong challenger in Mohamud Noor. Noor supporters pushed Kahn, who has represented the district since 1972, out of getting the DFL endorsement in April.

Ryan Kennedy, executive director of Minnesota Public Interest Research Group said the Kahn-Noor race is particularly important because whoever wins has a lot of potential to be a strong voice in higher education policy.

The 60B race also features two drastically different candidates. Noor, Minneapolis School Board member and executive director of the Confederation of Somali Community in Minnesota, is a political newcomer. If elected, Kahn would serve her 22nd term as state representative.

“It’s interesting when you have an established leader and someone newer,” said Andrew Timm, a senior political science student at Macalester College.

As the state’s most student-dense district, young voters have a lot at stake in this race, like rising tuition and growing achievement gaps.

The University of Minnesota isn’t the only campus with a tight state representative race.

Dorholt was elected in 2012 when the same-sex marriage and voter ID amendments caused student and young voters to come out in much larger numbers.

Minnesota Young DFL President Andie Whitaker said this race is one to watch out for because Dorholt is the only DFLer in the sixth congressional district and students helped elect him.

Incumbents who relied on young voters in previous elections could lose out this year without students coming out to the polls.

3. Tuition and education issues continue to be hot-button topics

Historic student-centered talking points like tuition and education have been at the forefront of recent local politics. Both Kahn and Noor, for example, have both advocated for lower tuition.

FairVote Minnesota Director of Campaigns Mike Griffin, who has organized in the University of Minnesota area for many years and ran against Kahn in 2012, said tuition and accessibility have been the district’s biggest issues.

Tuition continues to be a developing issue, and one that will come to play in future races. Lawmakers passed a bill last year freezing undergraduate tuition at Minnesota’s public colleges and universities for two years, though it’s unclear how the University of Minnesota and other schools will change tuition after the freeze.

And the Kahn-Noor race isn’t the only one that students of color should pay attention to this season. There are many educational issues that will directly affect them.

Whitaker said Minneapolis’ school board race, of which five of nine seats are up for election this year, is important for students and young people of color due to the city’s huge achievement gap.

4. Candidates would pay more attention to your needs

When it comes to candidates engaging students, it can sometimes be a chicken and an egg situation. If campaigns don’t address students and their needs, then students may not come to the polls and the cycle continues. Griffin said this is a problem locally.

“The reason why [students’] issues aren’t brought up is because their vote isn’t considered valuable,” Griffin said. “It’s because the average age of an August primary [voter] is 62.”

When politicians engage students it can be a powerful experience.

For Andrew Timm, having Sen. Elizabeth Warren, D-Mass., on the Macalester campus earlier this year to support Sen. Al Franken, D-Minn., was an important moment of politicians engaging students. Timm said Franken’s re-election campaign against GOP challenger Mike McFadden is an important race for him this year because both Franken and Warren have campaigned on fixing student debt.

5. Your friends could vote too

Come November, election coverage, political statuses and voter booth selfies will dominate many college students’ Facebook and Twitter feeds. It’s another step in the process for many politically active young people and the candidates they support.

Whitaker said talking about voting and sharing information on the issues with friends is key to building many political campaigns.

It’s difficult for candidates to reach out to students during the summer months, she said, but it’s important for politically engaged young people to be active on social media. It’s how she got started in politics, Whitaker added.

Seeing a student vote could inspire another person to get to the polls.

6. You have no excuse not to vote

During the last session, lawmakers passed a proposal that allows voters to cast absentee ballots without an excuse. For student voters who have class or work and cannot physically go vote on Election Day — or for those who simply don’t want to — there’s now no-excuse absentee voting.

Whitaker said voting early is important for getting students to engage in the political process.

But it’s unclear how student voter participation will fare on Election Day, Griffin said, because many students feel disenfranchised from campaigns.

“The jury is still out on how fired up students are going to be,” he said.

Correction: A previous version of this story  misquoted Mike Griffin. He said the average voter age at an August primary is 62.