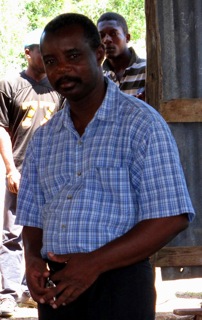 Six months after a 7.0 magnitude earthquake killed 200,000-300,000 people and destroyed much of the capital city of Port-au-Prince in the desperately poor nation of Haiti, Democracy Now and NPR are looking at the continuing devastation and evaluating international aid efforts (see sidebar). Here in Minnesota, two visiting Haitian priests are sharing information about their communities with sister parishes that had established ongoing relationships before the earthquake.

Besides visiting St. Joseph the Worker Church, the priests will visit New Creation, St Peter Claver, Chaska Moravian Church, Basilica of Saint Mary, and Guardian Angel. Call Bonnie Steele at 763-425-6505×228 for events and times to hear from the visiting emissaries from Haiti.

Bonnie Steele, a pastoral minister of St. Joseph the Worker parish in Maple Grove, and her daughter Nikki Steele went to Haiti in December 2008, hoping to build a relationship with some community there.   They were introduced to the parish of Bouzy through the Parish Twinning Program of the Americas, a non-profit organization that provides medical health care to communities in Haiti.

“When I met Father Claude-Renel Elys’ee, he looked sad and heavy shouldered with all the many needs of his community.” said Bonnie Steele.

“Visitors from Minnesota have changed the psychology of our people.” said Father Elys’ee.  “We thought we were forgotten but hope came from a long distance.  We now have hope and riches inside ourselves.  We thought we were nothing but now we have lots to talk about and to give to others.”

“Bouzy had never had a doctor, nurse, nor visitors to this isolated community,” said Steele.  “It is just 60 miles from other towns but it is another world.”

“We can give money and materials but what we want most is a far reaching relationship.” said Steele.  “The benefits of our relationship with the parish of Bouzy have been to see ourselves and understand who we are in the larger global community.  It has shaped and changed us locally.  These people are real human beings just like us.”

Steele arranged for two priests, Frs. Elys’ee and Pierre, from the parish of Bouzy to come to Minnesota from July 5-26.  Father Elys’ee will meet people here who have supported his ministry.  Father Pierre will raise funds and awareness during his stay.

The parish of Sainte Catherine d’Alexandre of Bouzy,  just west of the capital of Port-au-Prince, suffered earthquake devastation six months ago. While no deaths were directly attributed to the earthquake in Bouzy, 40 homes were destroyed, and starvation was widespread. No medication for tuberculosis and HIV/AIDS had reached the community following the earthquake.  Bouzy continues to experience an influx of family members who survived the quake, taxing the already-depleted resources of food and shelter.

Since December 2008, the Maple Grove parish of St. Joseph the Worker has organized and sent to Bouzy teams organized of medical professionals and others, each carrying a 50-pound suitcase of medical and school supplies.

In November, Steele and the parish priest, Monsigneur Yvan Museau, will work on logistics for a large shipment of food from Feed My Starving Children. In an e-mail, Steele described some of the challenges of getting this aid to the people who need it:

It is challenging to move an item of this size through Customs when it arrives in Haiti and then to get it out to the country side.  We need to determine what facility will be used to store the food securely, we need to ensure that the food is given away and not sold, and to guarantee that 75% of the food that is distributed is served to children.  Initial estimates from Fr. Elys’ee are that about 6000 people will be served.  We are working on a joint venture between St. Joseph the Worker, Feed My Starving Children, and the community in Bouzy to accomplish this.  My understanding of the nutrition value of the food is summed up in this way:  if the children received only one meal per day and received nothing else, the food would provide the necessary vitamins to promote brain growth, to inhibit blindness, and a host of other ailments that accompany starvation in children.  The hope is that the meal would supplement any other food they may receive.

There are many logistical obstacles that must be addressed and overcome before the food can be shipped into the community.  Among the activities I will be working on when I travel to Haiti, this will be one of significant importance.  Our team that traveled in March observed that with the influx of people from Port-au-Prince following the earthquake that the community was experiencing starvation.  The people of Bouzy are subsistence farmers, whose ability to produce enough food was already stretched prior to the earthquake.  It is now a much more dire situation – and the assistance that has poured in from the United States and other nations is being used primarily in PAP, Leogane, and Jacmel.  This areas were particularly hard hit by the earthquake.  However, this is not just a local disaster, this has become a disaster of national proportions and the entire country is being taxed by the disaster.